A few posts ago, I looked at the personalities of Denison students and only partly because I wanted to make ridgeline plots.[1] Mostly, I wanted to see if Denison shapes the elemental ways in which people engage society. The answer was no  – personality appears stable across time. Since student personalities are different from the general population in some ways, I wondered if personality profiles were linked to success at Denison. If Denison admits a particular profile of student, are those students more likely to do well? Let’s take a look using survey data from 534 students collected in February 2018.

If your stereotype of a good student is organized, open to learning, and with an agreeable attitude, then you are the big winner here. The most conscientious (organized, dependable) students have GPAs 0.3 points higher than the least. Note that the most disorganized student is still doing quite well, but is not performing at the top levels. It is a relief to this introvert that there really is no difference with extroverts (it points in a negative direction, but it is not statistically significant). Instead, agreeable students who are open to experiences have higher GPAs (0.2 points for the most agreeable compared to the least; 0.15 for the most open to experiences compared to the least).

Figure 1 – Personality Dimensions are Linked to Getting (Slightly) Better Grades 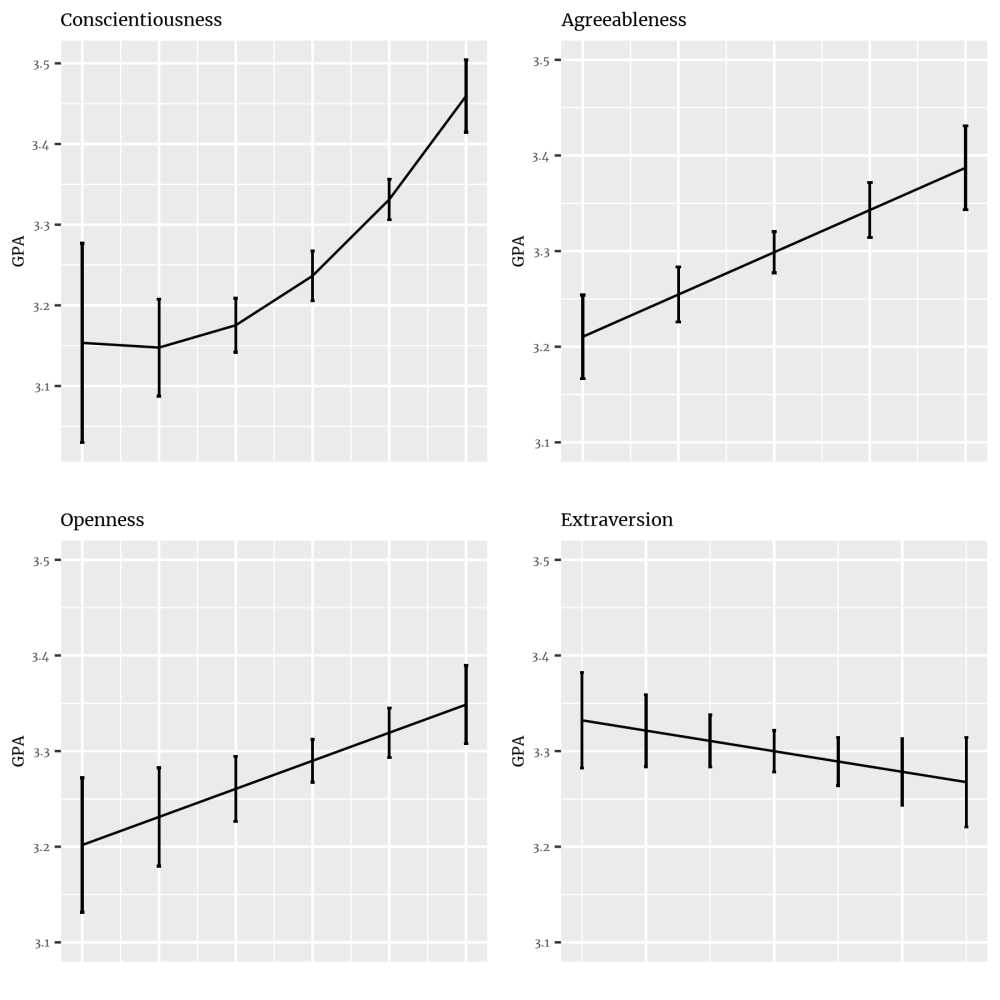 It’s important to place these findings in a bit of context. As we saw in my last post on personality, there are very few students who indicate they are very disagreeable and not open to experiences, which means that the differences between the high end and average levels of these dispositions are tiny, if still distinguishable.

What about social support? We’ve asked this question multiple times now and believe that it is tapping access to a crucial resource on campus that can help with breakups, micro-loans, homework, and errands. Let’s take a step back and see if personality dispositions are linked to gaining social support. The figure below shows, by and large, that those dimensions are not linked to social support with the obvious exception of extroversion; extroverts have double the support network size that introverts do. Who woulda thunk that extraverts report more social ties. But this is good news  – none of the other personality dimensions boost or penalize social support.

Figure 2 – Only Extraversion is Linked to More Social Support

Note: The x axis is showing more of the trait from left to right.

Since some personality dimensions factor in to how well you do academically, are they linked with how students report satisfaction with various components of their Denison education? I honestly hoped I would see no effects, but that’s not what shook out. The figure below highlights relatively consistent effects of three personality dimensions: conscientiousness, agreeableness, and extraversion. Compared to the students with the least of those traits, each is more satisfied with each form of satisfaction by 0.5-1 point (on a five point scale, so 12-25%). Agreeable, organized, socialites are much more satisfied with their Denison experience overall. I was surprised that openness to experiences did not factor in to satisfaction, but it’s reassuring that it does not. A Denison education pushes everyone around to experience new things, but also allows a considerable degree of choice  – that flexibility clearly allows people with different personality profiles to thrive.

Figure 3 – How Personality Dimensions are Linked with Forms of Satisfaction

Note: This shows the boost in satisfaction received from being the most agreeable, conscientious, etc., compared to the least of those traits. If the capped lines do not overlap with the red line (zero), then we say it has a statistically significant relationship with satisfaction. 90% confidence intervals shown. The estimates come from a regression model with all personality dimensions included, as well as race and gender.

We’ve written about personality effects before. Extroverts are quite a bit more likely to have mentors, which is not surprising. And another personality-ish disposition, risk aversion, is linked to changing majors less. There’s no doubt that each student has their own style to their decision making about people and academic choices. This post highlights the degree to which those styles are linked with multiple dimensions of success: getting good grades, acquiring social support, and feeling satisfied.

Students with certain personality traits do better on multiple dimensions of defining “better.” This does NOT mean that students with less of those traits do poorly, they just do a bit less well. Again, the evidence raises the critical question about whether colleges cherry pick students disposed to succeed. Or, perhaps more to the point, we know that the signals Admissions looks for in applications are correlated with personality profiles. The fact that you could do sports along with volunteering while maintaining a high GPA sends a strong signal of conscientiousness. If you can work together with others in multiple venues, you are surely extroverted, etc. I still believe that those are important experiences for prospective students to have, but let’s not kid ourselves that just anyone will do those things at high levels  – to an extent, they are markers for personality differences.

1. I’m coming clean: I have an unhealthy fondness for ridgeline plots. They’re so pretty and effective, and they remind me of standing on the top of mountains surveying ridge upon ridge, like this (this is in the North Cascades from my favorite spot in the world):