Over the past couple years that One Twenty Seven has been rockin’ and rollin’, we have been interested in the way that social support affects students. In 2016 we looked at who feels social support the most: by class year, income disparities, general involvement, and greek life involvement. We then looked at social support again in 2017 through its effects on things like GPA, missing classes, and even political activity. What we haven’t answered, until now, is how these support systems are affected by attributes that strongly shape how we interact with the world: gender and personality.

I wanted to explore the relationship between gender and support on campus partially because I am always interested in gender differences and partially because we have spent the last couple of posts talking about personality and those effects. In case you don’t notice this in your day-to-day lives or haven’t read any previous posts about personality and gender, men and women are different. Specifically, they are different in their personalities in stereotypical ways. Men are generally more disorganized than women (p<0.01) and women are generally more sympathetic and warm (p<0.01). But how might these differences affect their support systems?

First, before we explore this, we have to see if there is even a difference in support systems. Also, what is support? We define support as the number of people who you could count on to bum a ride to the grocery store, borrow $20, get a set of notes from a missed class, and talk about a breakup. In the figure below, we can see the distribution of the number of people that students can rely on for these things, collected from the 534 responses we received in our February 2017 survey. The distribution reaches from 0 to 10 people that students can rely on for support but has peaks at around the 4 and 6 person range and the 10 person range. 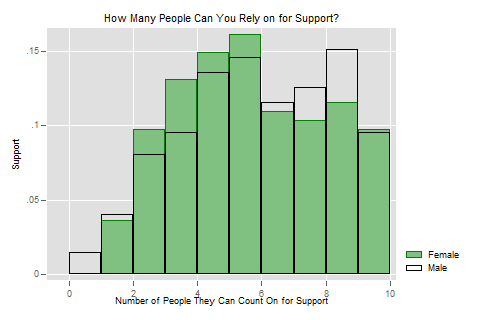 There is clearly a lot of variation among men and women, and this is where I think personality may come into play. As noted, men and women are different when it comes to many things including personality. Arguably the most relevant to support systems, or good friends as I see it, is how open to new experiences and how quarrelsome you are. In terms of openness, men and women aren’t really different and as you can see this reflects in the amount of support they see. The figure below shows that open people can rely on significantly more people for support regardless of whether they are male or female (but it makes a bit more of a difference for men).

Looking at self-reported “quarrelsome” people, we see a different story than what we would expect. First, the stereotype is rooted in some reality – women are less likely to describe themselves as critical and quarrelsome than men (10% less). And, generally, being quarrelsome is only marginally linked to support – there is no significant difference. Moreover, there is no gender gap here. This figure shows that no matter your gender, quarrelsome people will have a slightly smaller support group. This is interesting because we often think that women who are quarrelsome are treated differently than men since . On Denison’s campus, this is apparently not the case.

Maybe this is the case because we are an accepting group of discerning moral agents, even when our friends are quarrelsome, or maybe Denison students just don’t care about gender when they meet a quarrelsome person. If this is the case, Denison is breaking boundaries for women when it comes to support systems. We can see from the recent events of our Supreme Court confirmation extravaganza that women are judged differently than men, especially when women are engaged in conflictual situations, but at Denison it looks like we are overcoming some of that judgement and treating quarrelsome men and women the same.

Lauren Somers is a wannabe fitness guru who loves shows about murder and vampire slayers. When she is not huddled in her room napping she can be found in the Knapp lab analyzing endless data and eating pita chips.