We talk a lot about “The Denison Student.” She is engaged with the world, actively involved in her community, curious to investigate a wide variety of questions, willing to take some risks, etc. I’d like to think about this in a related, but more systematic way – what personality profile do Denison students present?

Over time, psychologists largely settled (ok, academics never settle, but bear with me) on a five-factor model that has become known as the Big 5 personality index, composed of: Openness to experience, Conscientiousness, Extraversion, Agreeableness, and Neuroticism (i.e., emotional stability). Together, OCEAN [1] helps us understand how someone tends to interact with others and the world.

They are often captured by self-identification with words that might describe their actions – being neat and dependable, for instance, is considered the core of conscientiousness. Anyway, let’s check out the results, which come from a survey of 534 students conducted in February, 2018.

The figure below shows the distribution of agreeing that the term is descriptive of them.[2] There’s a lot to think about here, but we get to confirm some of what is said about The Denison Student and then get to see what is avoided. No one is surprised to see that students are open to experiences and avoid saying that they are conventional and uncreative (more on this in a moment). Students also report that they are dependable (you’ve done group projects lately, right?) and sympathetic. 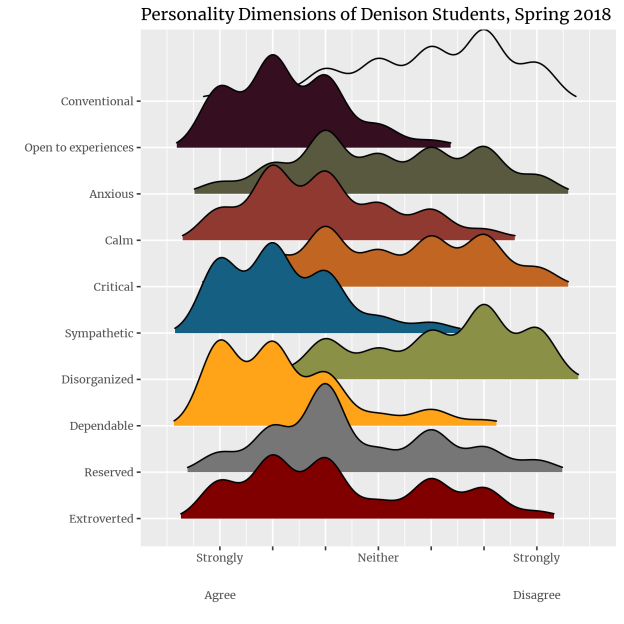 While these dimensions “load” well together in the general population, some don’t hang together well here. That is, students should be either anxious or calm, but not both. To an extent that is true, but students score highly on both their level of anxiety and their level of emotional stability (calmness). Another example is agreeableness – students report that they are sympathetic, which cuts against the notion that empathy is on a steep decline among students, but they may or may not be critical and quarrelsome. The critical exploration of the world guided by empathy strikes me as what we strive for in liberal education. Note, too, that students are likely to call themselves extroverted, but also reserved and quiet.

Do these so-called traits shift across four years at Denison? The theory and most evidence underpinning the Big 5 suggests that these dimensions are lodestars of social behavior, which means they shouldn’t change (much) across time. But the socialization of four years here runs deep and may result in shifts in how students engage the world. The figure below provides support for the theory of personality as traits. Of course, this doesn’t track individuals over time, but reports averages within class years at one point in time. The fact that they all line up together suggests stasis in self-concept. 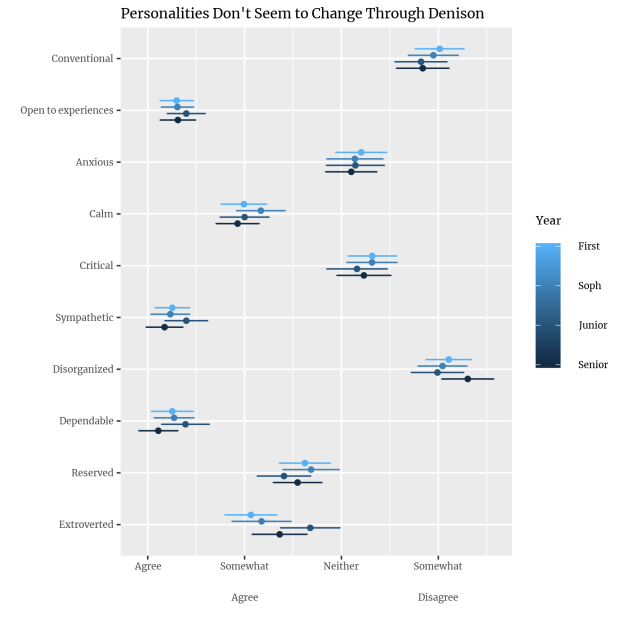 I wanted to check out one more thing – are people with certain personality traits attracted to particular types of majors? Would unconventional students end up in the Arts? Are social science majors particularly conflictual? Starting with the latter, I had it almost exactly wrong. Social science majors are less likely to agree that they are critical and quarrelsome! Oof. The rest are effectively indistinguishable. 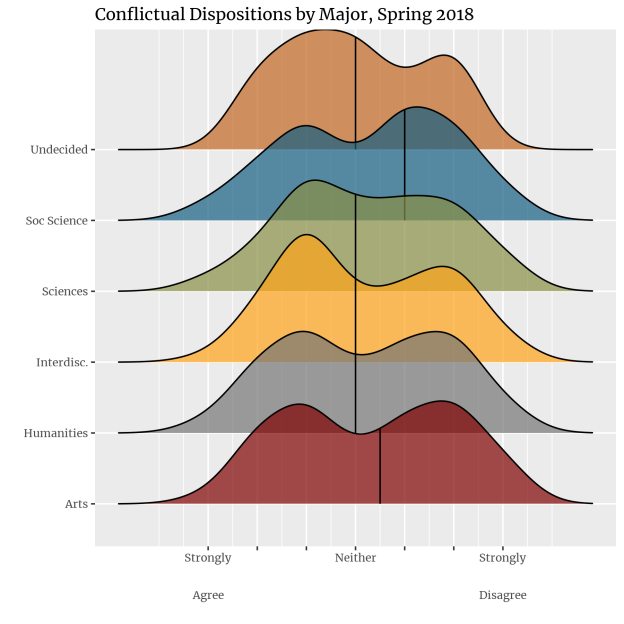 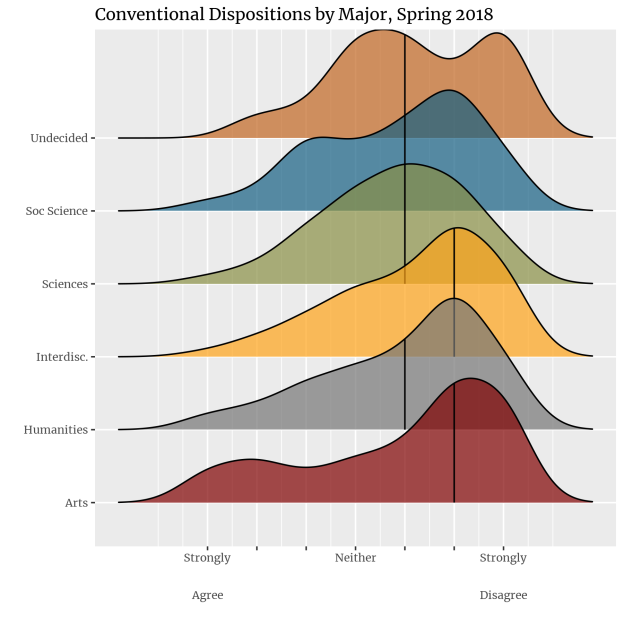 The stereotypes show through here. Denison students, in their self-assessments, are not conventional or disorganized, but are dependable, empathetic, and open to try new things. Given that these traits do not differ across class years, we would call this a “selection effect” – Denison attracts this sort of student and doesn’t appear to mold them in these ways.

Last question: Are Denison personality profiles any different from the general population (genpop) in the US? I happened to have survey data from a nationally representative sample from 2016 that uses these exact same questions. The results (below) are revealing in that Denison students are different from the genpop, but not tremendously so. Students are more open to experiences, less reserved, more critical, less conventional, less calm, and more anxious. That sounds right, but note how small these differences are. 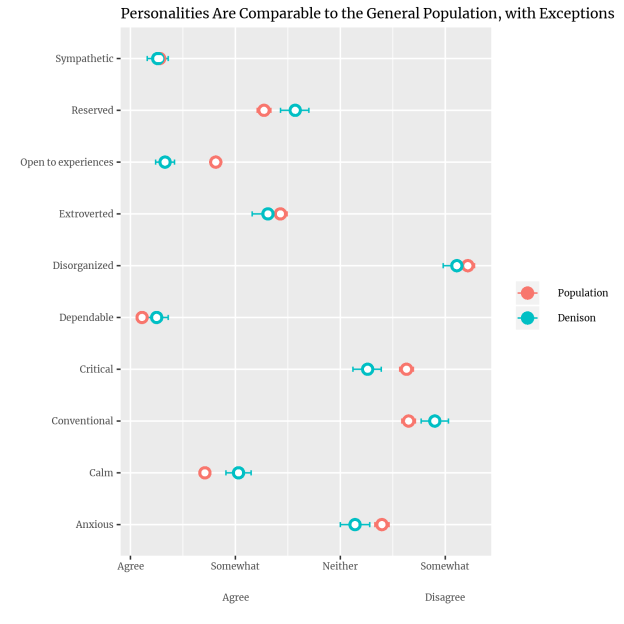 At least in political science, it is controversial to map out personalities and their effects on political engagement. Fixed dispositions suggest a degree of brittleness to the system, where some people just won’t engage because of their traits. Taken to a logical end, this work could suggest that political campaigns target people based on their personalities, focusing only on those disposed to engage. Oops, they already did that (see the now defunct consulting company Cambridge Analytica that ran part of Trump’s campaign). It makes me uncomfortable to think about trait-delimited citizenship.

Just as important, how would you translate these questions to a liberal arts education? Are some personality profiles ideal for our form of education? That is a question worth asking. And asking that question can help us think about the levers we can pull to level the playing field.

1. I prefer the acronym OCEAN to CANOE because I’m a George Clooney fan. Bet you can’t guess my favorite Clooney flick.

2. Actually, they were presented with pairs of words and the single term shown in the figure is representative of the pair. So, critical was paired with quarrelsome, for instance. Related, the words in the figure are organized by twos so the top two make up the dimension Open to experience, the next two are Neuroticism, then Agreeableness, Conscientiousness, and Extraversion.