There’s this old show called Felicity that I really liked back in the day. Felicity applied to NYU on a lark to chase a boy. That’s ridiculous, obviously, but she quickly moved past that hiccup in cognition and took advantage of all that college had to offer. The reason I mention it is that it helps to highlight the serious potential gap in intentions for what you might do in college and what you actually will do. For many students, they will have new friends, join new orgs, and take classes in areas they only dimly perceived before, if they knew about them at all. They will also likely change their major.[1]

In the survey of 540 students just concluded this morning, we asked for the first time, “Thinking back to when you first started at Denison, how many times have you changed your intended major?” Those results document that switching is common. Fully 64 percent have changed their intended major at least once. The average is 1 major change for the whole student body, but that figure naturally grows a little for older students – it’s 0.75 for first years and 1.10 for older students (that’s a significant difference). 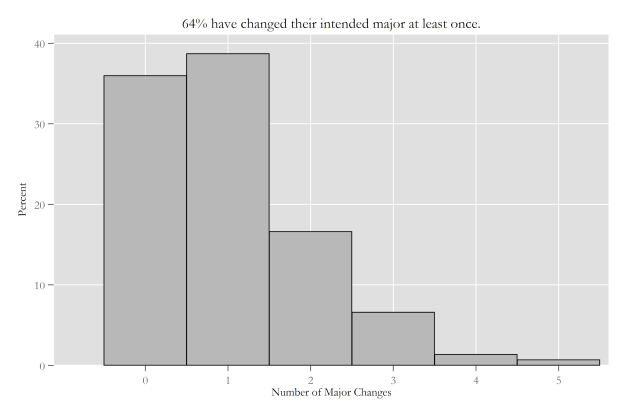 I think my species (the professor types) explicitly aids and abets this sort of behavior. We encourage you to take courses around the college. Think you know your major? Great, take another one but also take a class in a cognate (similar) field. Also, make sure you take an Art History class so you know what ‘conurbation’ and ‘tryptic’ mean. Did you take Woodyard’s intro class in Religion yet? Do you honestly think that a liberally educated student in 2018 shouldn’t know something about coding? Etc. Of course, the scarcity of seats sometimes forces you to take courses around the curriculum, too. But all of these experiences mean that you have lots of opportunities to re-envision your major path through college. That’s the law of unintended consequences.

But not everyone switches majors. Do you know those people who put their head down and just keep plowing forward bison style? It’s fashionable these days to say that those people have ‘grit’; we did a post about this before and Denison students are reasonably grit-ful.[1] It’s not surprising that gritty students are far less likely to change their majors. The easily distracted average about 1.5 major changes, while the grittiest average 1 whole major change less (~0.5).

One reason people stick with decisions is because they are cautious about making changes (i.e., risk aversion, which we’ve written about before). Though this is not the intended use of “major” in the question text, the parallel gives you a clear idea: “I am very cautious about making major changes in life.” The evidence above (middle panel) shows that risk aversion (agreeing with that statement) is linked to fewer major changes.

There’s nothing necessarily right or wrong about either of these things. It is not normatively right to embrace change nor is it obviously a ‘good’ to plow through with gritted teeth. These are thought to operate near the level of personality – they are dispositions that people bring to filter information at decision points as trivial as whether to try new foods or as weighty as changing your major. So, some of major changing is just endemic to the type of person a student is.

But isn’t major choice just a rational pursuit of good grades? Though students are stereotyped as obsessed with grades, often with the false trade off of this coming at the expense of knowledge, I doubt that’s true (or certainly not a complete explanation). In the far right panel of the figure above, there is a very slight negative relationship between GPA and changes in major (more changes, lower GPA), but it’s not statistically significant. There are a lot of reasons to change a major and poor performance in classes in one department is clearly a small to non-existent factor.[2]

Honestly, the reason I put this question on the survey was because I just didn’t know how to talk about major changes in my Advising Circle last fall. Now I do: Changing your major is very common at Denison – most do it at least once. Some are more comfortable with such a shift than others, but I would not attach much normative value to it. Changing majors is not a sign of failure, nor necessarily a sign of success. It is about finding an engaging set of questions, methods, students, and professors with which to spend about ⅓ of your 127 credits.

1. The average grit scores was .62 in the fall and is .58 now. I don’t think that’s a meaningful difference and wouldn’t feel comfortable saying so without a statistical test and some panel data where we can compare one person’s responses across time.

2. GPA is a probably a weak proxy for doing well or poorly in a particular major since it includes all classes rather than those in the major. So take these results with a grain of salt.