The trending topic on campus for the past week has been the groundbreaking news that Residential Communities will be “adding professional staff at an entry-level position that could fulfill the duties of Head Residents on a full-time basis.” Although this decision was made official just recently, talks of it have been stirring for a while, allowing OneTwentySeven to survey student opinion on the policy proposal in February (2018). So, where do Denison students actually stand on professionalizing Head Residents?

Let’s start with a look at the overall results of our question “How would you respond to the following proposed policy? Residential Communities (formally Residential Education & Housing) dissolve the Head Resident position and hire full-time professional staff members, who would live in the residence halls and take on the roles and responsibilities previously fulfilled by student Head Residents.” The options ranged from strongly opposed (=1) to strongly support (=7). I removed the 18 ‘no opinion’ responses (3%) to see where the people who have an opinion stand on the issue. 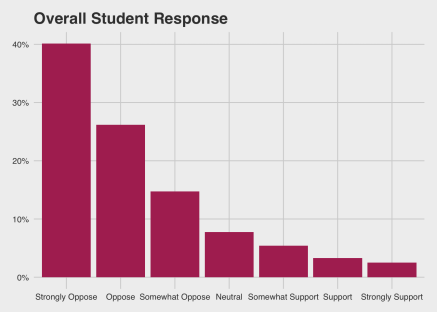 Opposition to this policy runs very strong in the student body – 81% oppose it (combining all ‘oppose’ categories). There is more ‘strong opposition’ (40%) to it than all categories of support and neutrality combined (19%). Average student response is 2.32 on this 1-7 scale, which is showing considerable opposition. Now the question becomes, from what groups on campus is support and opposition coming from?

It is pretty standard in public opinion research to focus on interests – so who has an interest in opposing the move to adult/professional staff in HR positions? One obvious source would be students in residential life right now who might aspire to HR positions themselves. Being an RA or HR comes with pretty sizable perks (though also a heavy workload), so this policy change could be interpreted as having less opportunities. An alternative theory might be that RAs might either love or hate the idea of reporting to a professional staff member as opposed to the conventional HR – who’s also a student and therefore a peer.

The figure below shows the difference between Residential Community staff members and other students. Res Comm student staff are both more opposed and more supportive. A few more strongly oppose the new policy, but there are clearly a number who support it. It turns out that current HRs are much more supportive (by 26%) than RAs and other students. Perhaps some HRs recognize the value of a dedicated staff member who can handle the heavy (overwhelming?) workload. Otherwise, current RAs are opposed at the same effective rate as all other students (2.4 and 2.3, respectively – not statistically distinguishable). 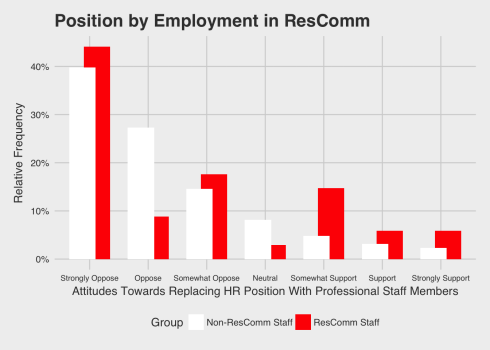 As OneTwentySeven pieces have repeatedly demonstrated (e.g., here, here, and here), certain student groups are more invested in Denison’s party culture than others. For instance, varsity athletes and Fraternities often expend considerable effort capturing the 6-person suites on East Quad. And the same population is heavily opposed to security cameras, which seems close kin to adding professional staff in the halls. What does the evidence suggest? Does investment in Denison party culture predict opposition to this Res Comm policy change? We can look at Greek Life first to see where they stand. 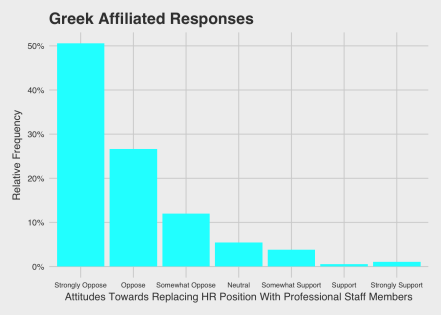 There is pretty strong opposition from the greek community as well, with an average response of 1.91. When you compare that to the nonaffiliated average of 2.55, we do find a statistically significant difference. However, we know that the party scene is mostly coordinated by the fraternities so it might be better to separate this by gender. 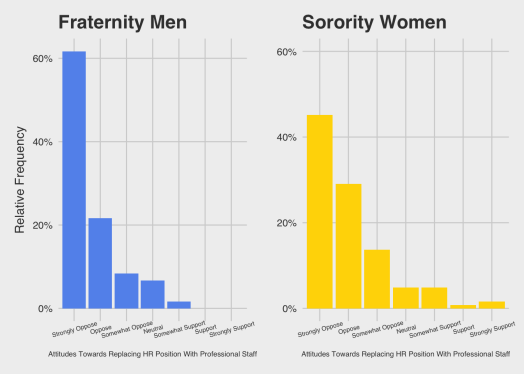 Not surprisingly, fraternity men have much stronger feelings against this policy – there were actually no responses in support or strong support. We got an average response of 1.65 for greek-affiliated men and 2.04 for greek-affiliated women. That difference is also statistically significant. An important thing to remember, however, is that those averages are still more opposed than neutral and even farther away from any sort of support. Essentially, sorority women are not more in favor of the policy than fraternity men, they are just a bit less opposed.

Staying along the lines of party culture influencing position on this issue, let’s look at 30.5% of students who responded ‘yes’ to the question “Did you engage in binge drinking in the last week?” The opposition from this demographic pretty much speaks for itself.

Class year might play into feelings on this issue. Seniors are leaving and less likely to care because the policy will not affect them and this would not be some drastic change for the freshmen. It turns out that while opposition is nearly uniform, seniors (2.38) and freshmen (2.52) are a bit less opposed, while sophomores and juniors are the most opposed (both 2.19) 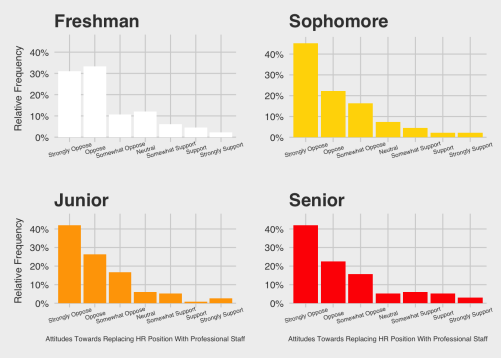 You might be wondering if students’ attitudes towards HRs and RAs play an role here – maybe they’re not a fan of the department and perceive the change as giving Res Comm a bigger presence in the halls? In the survey, we asked respondents to rank how they felt towards RAs on a scale from 0 to 100, with 100 being very warm (positive) and 0 being very cold (negative). 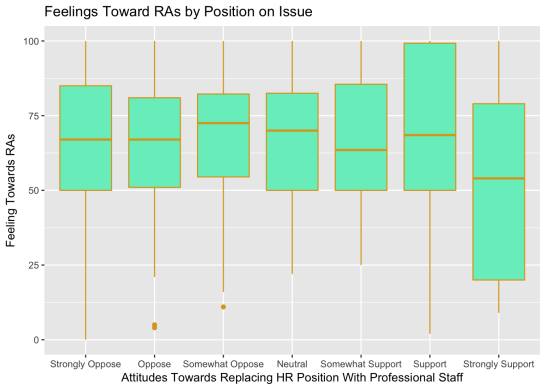 People who oppose the policy, on average, like RAs more than people who support the policy change. I suspect that not liking this policy comes from a distrust of authority and the impact that authority would have on parties. However, the opposition seems to like RAs who, although peers, still wield some authority. Another interesting point is that the strong support for the policy has the lowest average. If you aren’t too warm on RAs, why support a policy that calls for essentially full-time, super RAs? Another explanation might be that the students who like RAs do not want see HRs go or if you dislike your peers telling you what to do, you’d prefer professional staff over HRs.

If you could not tell by the title of this piece or the graphs within it, Denison students are overwhelmingly opposed to the policy of “adding professional staff at an entry-level position that could fulfill the duties of Head Residents on a full-time basis.” The original intent of this article was to look for certain demographics that support and oppose the policy and, although searching thoroughly, I could not find a demographic that was, on average, in favor of the policy (HRs come close). This in itself is troubling because while the campus might be opposed to it, this will be the policy that governs our residence halls next year. While there are differing theories out there on the motivation behind this policy (read the Bullsheet), I personally do not think that there was any malicious intent from Residential Communities. Residential Communities and their staff are a wonderful department that does so much more for this campus than just send you emails about floor programs that you are not going to attend. The department has made a number of recent changes, all with the intent of improving the overall Denison Community. However, it seems with this change, the department embraced the idea of community without actually considering the views of the community itself.

Chris Nakon is a Data Analytics and Economics major who apparently likes using graphs to stir up trouble.