A pretty remarkable thing happened yesterday – a Denison freshman appeared on the Tucker Carlson show on Fox News to talk about free speech on campus. Omari Garrett (class of 2021) wrote an op-ed for The Denisonian that served as the inspiration for the invitation, arguing, “Many passively enable white nationalism via their devil’s advocacy.” Appearing on live TV in the lion’s den was an incredibly brave thing to do and I applaud what I regard as the robust and respectful debate that was held on the show.

You can see the segment here.

Just what do Denison students think about free speech on campus? Fortunately, 127 and my senior seminar are in the (campus) field right now surveying Denison students about this very issue. So far we have about 500 responses and are sending reminders to get more, so treat this as a preliminary look at the evidence. The responses are balanced by class year and have an accurate distribution of men and women (43-57%). The GPA is a little high (3.27), which is always the case with survey response on campus. I regard this sample as likely reasonably representative of campus opinion.

We asked about free speech views in several ways, but I’ll focus on one here that is close to the issue that Omari and Tucker discussed. The survey asked, “How would you respond to the following proposed policy? Denison University should consider speech that offends another person as constituting discriminatory harassment and subject to disciplinary action.” The figure below shows the results – the campus is almost evenly divided with opinion spread across the allowed spectrum. In sum, 43 percent expressed some form of opposition, 10 percent were evenly divided, and 47 percent expressed some form of support for the policy. 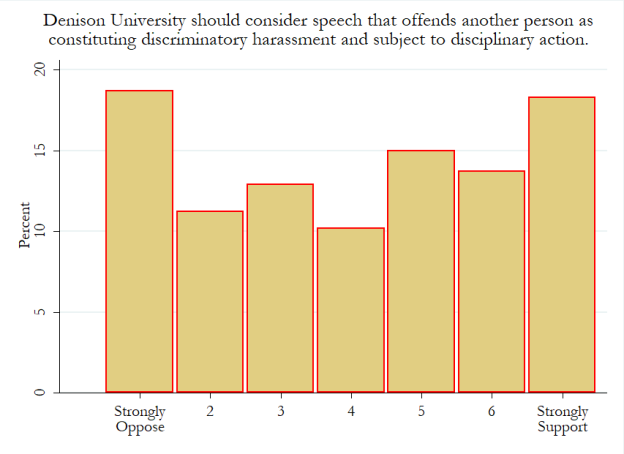 Opinions are more intensely held the more extreme they are and this opinion is no exception as the figure below shows. Those on the poles express that the issue is very important to them (the scale ran from 1 “not important to me” to 7 “very important to me”) with the few in the middle expressing much less sense of personal stake.

At this point, without an open campus dialogue, I would expect that people feel surrounded by support. Especially at the poles, students will perceive that most of the campus takes their position. The survey asked students to estimate the portion of campus that agrees with their position and the results are below. It turns out that those opposed to the policy are much closer to the mark than those in support of it (if we are lenient about what counts as agreement). As noted above, just under half opposes the policy, which is a bit below where most estimates are here. However, those who support the policy vastly overestimate agreement on campus. Those most in support are 20 percent above the mark, estimating 67 percent agreement compared to the actual amount (47 percent).

This debate is worth having. Some of our most closely held values are at stake along with feeling able to be involved in public without fear of harm. Given the range of views that have become normalized in the past 10 months in the US, we arguably are experiencing a greater test of democracy than we have seen in several generations. Here at 127, we will continue to write about this issue, attempting to give some perspective about who takes what view and exploring some further dimensions of free speech at Denison. Stay tuned, start talking.