Selecting a major is one of the biggest decisions someone makes during college. This one choice may have many implications, including how they’re viewed by others. When two students meet for the first time, “what’s your major?” is usually one of the first questions they’ll use to break the ice (always either immediately preceding or following the classic “where are you from?”). And whether it’s fair or not (hint: it’s not), students get judged depending on their answer. Communication major? Probably not very smart. Bio major? Must be a bad writer. Econ major? Frat star.

To better understand this phenomenon, I set out to explore how students view other majors. I cannot support or refute many of these views, but I can at least show what some perspectives are. For logistical purposes, we have grouped all majors into five divisional groups: social sciences, sciences, humanities, arts, and interdisciplinary programs.

In order to measure attitudes, we asked nearly 600 students in March of 2017 which divisional they belong to.[1] We then presented them with a series of statements about other divisionals. Each began with “Students with majors outside of my divisional…” and ended with seven unique claims, which you will see below. Survey respondents were asked to rate how much they agreed with each statement.[2] Reported are the percentages of students from each group who agreed (or strongly agreed) with the given statement.

I think the natural inclination when reading any bar graph is to immediately jump to the outliers…which is why I’ll start off my analysis by picking on the science kids. 61.3% of students majoring in a science agree other majors “have it easier.” 56.8% claim the other majors have less homework or studying to do. In both instances, they’re way above the average (denoted by the gray, dashed line in the figure). Clearly, science students at Denison feel some sort of academic superiority.

We can gauge the accuracy of these beliefs to the extent, because we also asked respondents how many hours of homework or studying they do on an average night. As it turns out, science kids really are doing the most work; they reported an average 4.17 hours of homework and studying a night, while the non-scientist average is 3.73 hours a night – a difference of 26 minutes (which is statistically significant).

When asked if “other students couldn’t handle my major,” science students once again agreed far more than average. But they’re not the only ones who stand out here: over half of art students (51.1%) – more than any other group – agreed with the same statement. While we have no objective data on the manageability of each major divisional, I will admit I’ve dropped two art classes during my time at Denison…

Art majors also topped the charts (78%) in one other way: “Students with majors outside of my divisional will make more money.” This high agreement wasn’t seen with just those in the arts, however; with an average of nearly 40%, this statement pulled out percentages much larger than any other did. Majorities in both the humanities and interdisciplinary programs agreed with the sentiment while the social sciences sat at 40.3%. What this seems to indicate is that Denison students may hold a fair amount of anxiety about their financial prospects in the future…at least when being compared to other majors. 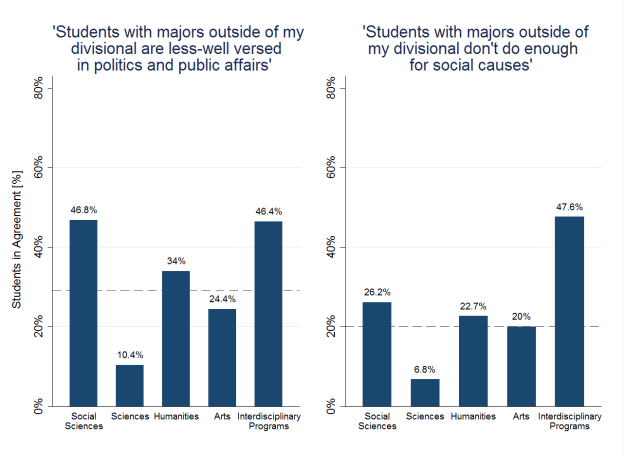 While several students love to talk about the difficulty or earning-potential of their major, there’s more than one way to look down on other divisionals. Take the above figures, for example. The social sciences and interdisciplinary programs – two divisionals which haven’t been very noteworthy up until this point – tend to shine when it comes to believing other majors aren’t doing enough for social causes and are less well-versed in politics. Meanwhile, these statements drew record low agreement from science students.

Finally, we asked students to agree or disagree with one last statement: “Students with majors outside of my divisional are happier.” The hope is that disagreement would be high across all divisions – despite our many differences, each student is hopefully in the major that fits best for them and makes them the happiest.

Figure 4 – Few Believe that Other Students are Happier, but that Feeling is More Common Among Scientists

Well that’s a bummer. I was having fun picking on the science kids throughout this article, until I saw this – now I just feel like a jerk. With over a quarter of this group agreeing that students in other divisionals are happier, are science students truly miserable?

The answer is no, by at least one measure. In the survey, we also asked students how satisfied they were with various components of their Denison experience, including academic, social, extracurricular, and overall. The average satisfaction levels for each divisional are close and all pretty high – no one divisional seems to be any less satisfied with any component of their Denison experience than the others.

These results spoke volumes. The sciences claim a sort of ‘difficulty’ superiority, the arts claim others couldn’t handle their major, and the social sciences and interdisciplinary programs can be pretty pompous when it comes their social activism and political participation – all at pretty mind-blowing rates, too. So what’s the conclusion here? Start hitting up those humanities majors more, they’re clearly the least pretentious….or, every student, regardless of their major, has their strengths and weaknesses, and is conscious of what they bring to the table.

Oliver Gladfelter is a huge advocate of procrastination and spends most of his time finding new ways to waste time. He also studies political science on the side.

1. Of all Denison students in our sample, 65 percent have just one major, 28 percent are doubles, and 2.4 percent are triples. Because we only asked survey respondents what divisions they’re in, rather than specific majors, students are only counted as multiple majors if their 2+ majors are in separate divisions. If this was the case, then their agreement scores counted in each of their divisional groups.

2. For each statement, survey respondents could answer with one of the following options: ‘strongly agree,’ ‘agree,’ ‘neither agree nor disagree,’ ‘disagree,’ ‘strongly disagree’