While in many ways the Sunnies represent the party culture at Denison, it is not the only dominion of debauchery on campus. East Quad also lays claim to a segment of Denison’s party culture – the 6MS (six-man suite). Many most likely remember their first time attending the somewhat ill-titled “Around The World,” in which they visited a series of (fraternity-related) Mediterranean- or Irish-themed rooms for a drink of wine or whiskey. The parties of East are conducted in the notorious six-person suites, which may conjure images of flooded rooms, destroyed walls, or six beds shoved into a single room. Nonetheless, there is fierce competition every year over these oddly configured rooms as they are almost the only spaces used for parties on East (with the exception of the under utilized Shepherdson lounge). With a crisis concerning space usage occurring on campus, it only seems fitting to investigate related questions such as: Who is occupying what spaces on East? What do people use these spaces for? And how does this impact student’s opinions about space usage on campus?

Using data from a survey of just under 600 students conducted in March 2017, the figure below helps us get a general sense of how groups occupy residential spaces around campus. It shows that those on Varsity Sports teams and Greek lettered organizations are the only groups that average two or more roommates. Those associated with Cross Cultural Engagement, Religious/Spiritual Life, and Social Justice/Advocacy have the lowest average number of roommates. It is surprising that Greeks and Varsity athletes are the only groups that surpass an average of two roommates on campus considering the high frequency of doubles among first and second year students. However, we know that first years are not less involved from other articles, so this finding is particularly interesting. 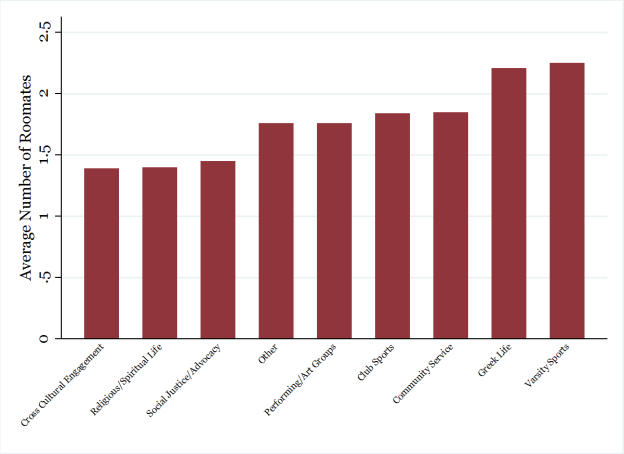 An explanation for what pushes these two groups over the two-roommate mark can be quickly ascertained by the fact that out of the forty-one people who reported living in a 6MS in our sample, twenty-four were Greek and sixteen were in a Varsity sport, which totals forty out of the forty-one. Of these forty-one people, nine reported being both Greek and in a Varsity sport. In other words due to the higher number of roommates required by these suites, they are held by people with strong in-built networks such as Greeks and Varsity athletes. Currently, Greeks and Varsity athletes funnel into these oddly designed rooms to use as social spaces while other non-affiliated students are effectively denied suite-style living on East.

If the 6MS are notorious in Denison’s party culture, is that reputation born out in the data? The figure below shows the average number of reported drinks consumed when drinking among Greeks and non-Greeks in and out of 6MS. The figure reveals that Greeks living in the suites on average drink about two more drinks than those Greeks not living in 6MS, and that non-Greeks living in the 6MS drink at levels no different than others without letters on campus. 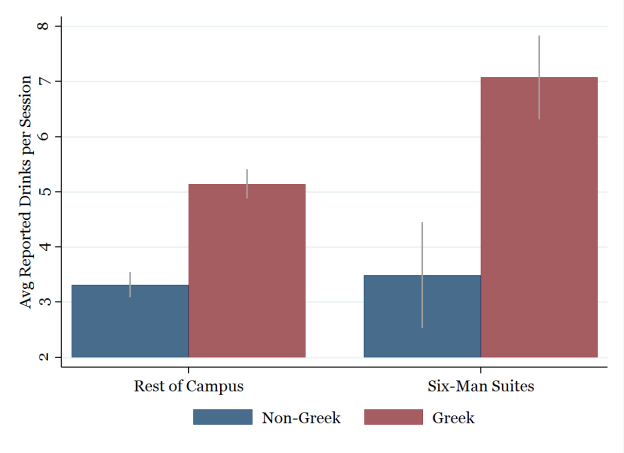 Denison is embroiled in a series of debates linked to control over space involving wide swaths of campus. Some want to further distribute and privatize space, some want more access to private (party) spaces, while others want more open social spaces. I wanted to explore student investment in those debates given that some effectively control access to the party culture through the 6MS. They probably like this position of power and would take attitudes meant to maintain it. The figure below shows that those with fewer roommates among non-Greeks generally favor parties in social spaces such as Lampson Lodge or Shepherdson lounge. Those denied suite-style living on campus and who have smaller in-built networks on campus  are clearly interested in more democratic access to the social scene and clearly think publicly accessible parties are appealing. However, as the number of roommates increases for non-Greeks, the support for the use of open social spaces decreases to the level that Greek affiliates take. Both groups’ attitudes reflect their position of power in control of social spaces such as the six-person suite. 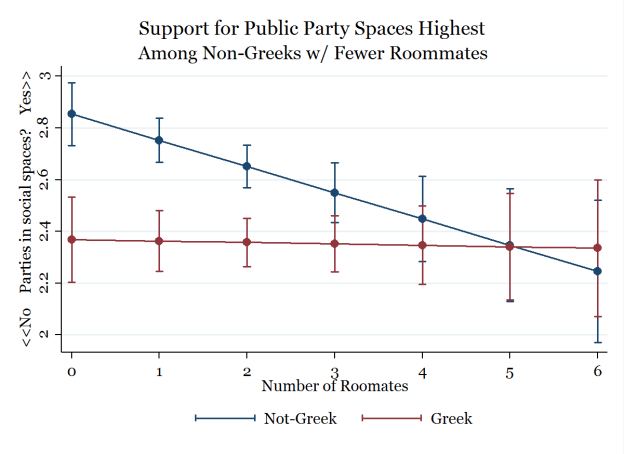 This isn’t to say that Greeks are necessarily satisfied with the current state of social spaces on campus, especially when considering the Myers’ situation. I think it’s rather that Greeks are also unsatisfied with the social situation, but are concerned over how the school might change the current status-quo. They surely prefer greater privatization and chafe at the prospect of (further) Denison regulation of parties. On the other hand, those with smaller social networks and fewer roommates are also unsatisfied and experience some degree of marginalization. While I offer no prescriptive advice for the subject of space use on campus, this piece hopefully helps quantify and articulate some of the issues being faced on campus right now.

Eric Buehler is one of those Data Analytics students who hopes to be employed one day. In the meantime, you can find him writing about student behavior at Denison.