Following the COVID year of uncertainty, most institutions on Denison’s campus returned to normal, or at least a predictable version, with one notable exception: Fraternity party spaces. Even though Fraternities were allowed to host parties last year, this year brought major changes as fraternities were barred from hosting parties in their spaces at the beginning of the year. However, the administration shifted to allow fraternities to host parties on Saturdays.

These actions by the administration are only a few in a long line of turning the screws on greeks and party culture. Starting with barring Fraternities from living in their spaces in 1996, the administration has increasingly sought to limit fraternities’ ability to party in their spaces. Left out of this equation is the student population: Do they support fraternities’ ability to party or do they want them further marginalized? In the October 2021 survey, we asked Denison students a variety of questions centering around fraternity parties at Denison. 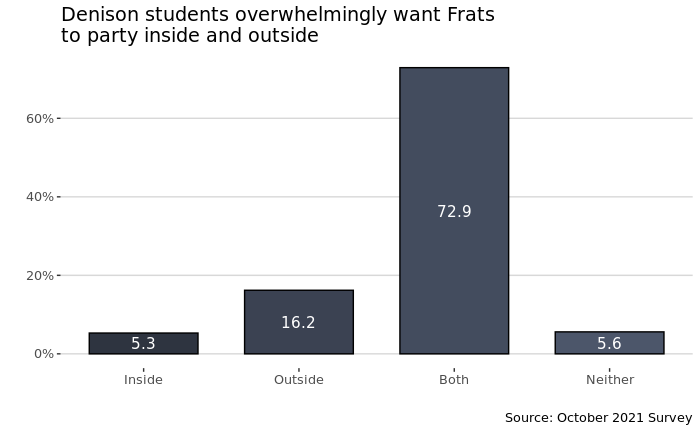 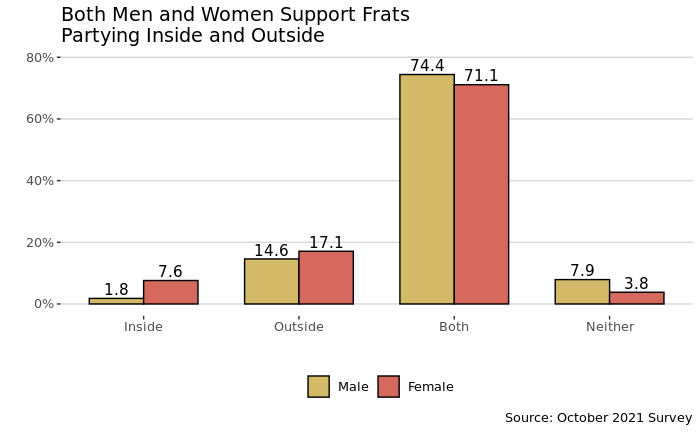 Whenever we talk about greek life, we are at least implicitly talking about racial differences. In the October 2021 survey, 26.2% of all whites indicated that they belong to some greek life organization, while only 8.4% of non-whites said they belonged to one. Is there a difference in partying attitudes between whites and non-whites?

Whites were much more supportive of frats partying both inside and outside, supporting them at 77.8% versus 53.3% for non-whites. Non-whites differ quite a bit from whites in the inside only category, supporting it at 11.2% versus 2.9%. Ultimately, whites on the whole were more supportive, as 95.7% said frats should be able to party somewhere in their space, compared to 91.6% of non-whites. 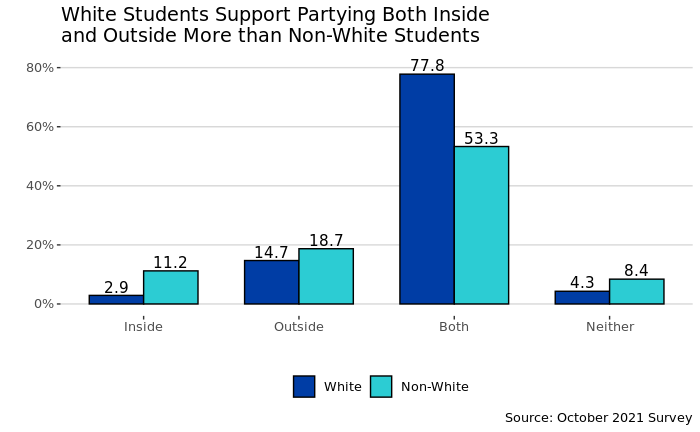 Demographics aren’t the only area that may affect attitudes of frats partying; location can also make a difference. I have met quite a few Denison students, especially those who live in Schaff, Morrow, Preston, Kappa Sig, and Beta that have complained about their inability to fall asleep on the weekend due to party noise. All five of these dorms are located on North Quad, where the fraternities would be able to host parties in their spaces. Are Denison students who live on North Quad less supportive of fraternities’ ability to party where they live? 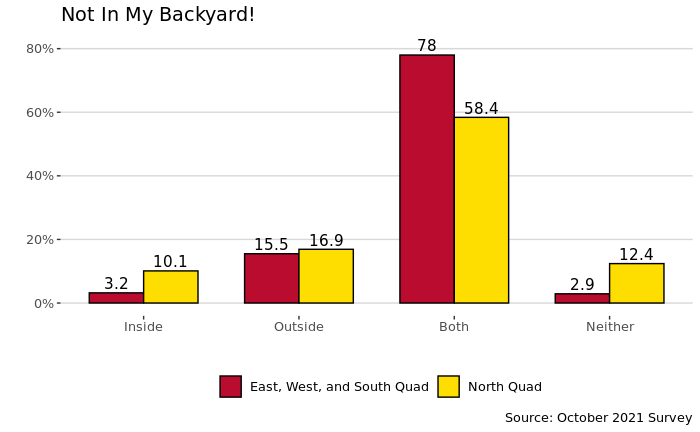 Are Greeks more likely to support fraternities partying? Conventional wisdom would of course say yes, but there may be reasons against. Fraternity members may want to move parties away from their houses to avoid property damage or want to keep parties at senior apartments where access is more controlled. 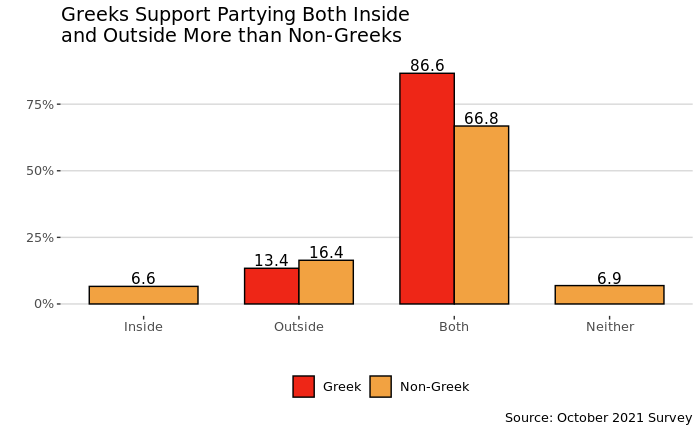 Another important aspect of fraternity parties (and many parties on campus) is alcohol. It is no secret that many people bring alcohol to these events and fraternities have alcohol that may end up in the possession of minors. In the October 2021 survey, we asked respondents a simple question: Should fraternities be allowed to serve alcohol at their parties? 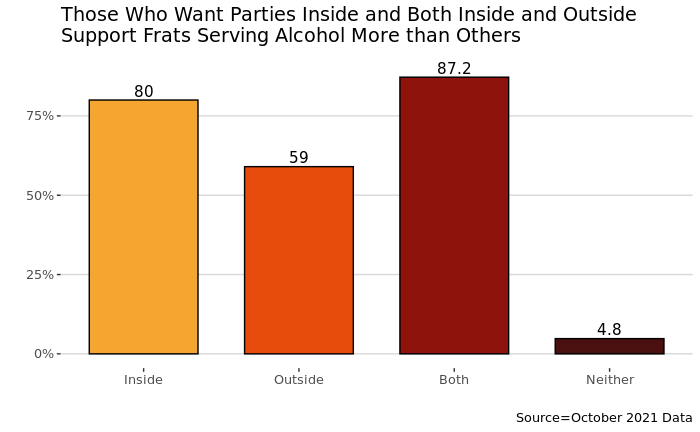 Drunk 18 year olds aren’t known for being the most quiet and respectable people in the world, so how do those who live among the fraternities feel about alcohol? 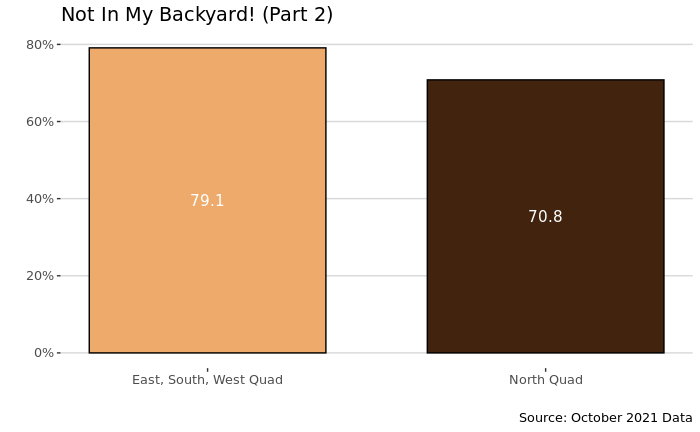 As mentioned earlier, sometimes alcohol at fraternities parties ends up in the possession of minors. Generally speaking, all seniors are of legal age, a decent amount of juniors are, and very few sophomores and freshmen are. Is there a divide along grade lines when it comes to serving alcohol at parties?

Freshman and seniors are much more supportive of fraternities serving alcohol at parties: 83.2% of freshmen and 82.7% of seniors support fraternities serving alcohol at their parties, while only 75% juniors and 74% of sophomores support fraternities at their parties. Two possible explanations for freshmen is that the novelty of college drinking still exists and they do not have any other way to get alcohol, while for seniors a possible explanation could be the reality that they will no longer be Denison students in 6 months and want to make the most of it. This is not true for juniors and sophomores; the novelty of drinking has worn off, they are 21 or know people who will buy, and there is no sense of the end soon which ultimately leads to lower rates of support. 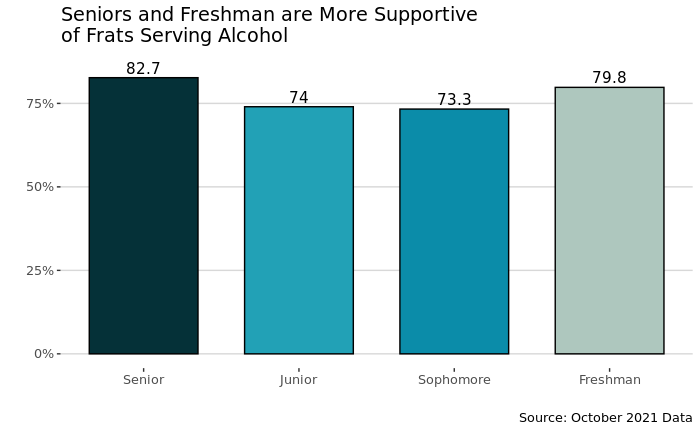 The results of the October 2021 survey are very interesting with several things to consider moving forward. While the Denison administration has put certain roadblocks to partying for Fraternities, the majority of the Denison student population has made it clear that they want Fraternities to continue partying both inside and outside. However, there are certain things that must be considered with these results. How do you go about letting the Fraternities party without disturbing the people of North Quad? While they majorly support the frats, there is obviously lower support due to suffering the consequences of being woken up at 2 am by screaming sorority girls outside their windows. It is a complex problem that does not have a straightforward solution.

Zach Broeren, a Junior at Denison University majoring in Political Science, is now starting to figure out too late he probably should have majored in Data Analytics.