2016 felt like it was going to be another historical moment, a second big first to follow the big first that happened in 2008 when Barack Obama was elected president. Thanks to the electoral college, a 3 million popular vote victory was ground into defeat. For so many reasons, women were pissed – they marched in pink ‘pussy hats’, they protested, they changed party affiliations, they stopped dating MAGA-boys, AND they ran for office in greater numbers than ever before. The class elected in 2018 had more women than ever, so that women now make up…a quarter of Congress. Yeah, it’s not that high, but at least there’s an upward trajectory as the figure below from Pew Research shows. 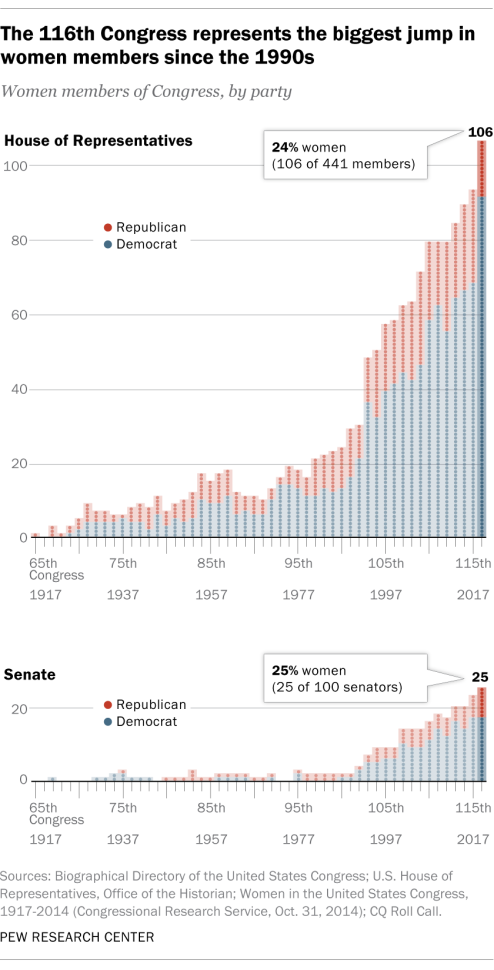 Are Denison students aware of this? As part of my Power and Gender course, we included a battery of questions in our March 2019 survey about what students know about women in politics. It matters because it shapes our perceptions of what is an appropriate role for our identity group – is politics still a “man’s game” or is it moving toward being gender neutral?

We asked what proportion of state legislators as a whole, the US Congress, and the two parties’ caucuses were composed of women. I am astounded that the average values are so close to the true mark. Students’ perceptions tend to run a little hot, but only by a few points, and the estimates are pretty tightly clustered as well. Women are about a quarter of all legislators nation-wide and there are more Democrat women by far than Republican women. In fact, that is the only place where students are relatively far off – they overestimate the portion of Republican women by 10 percent (18% versus the true value of 8%). It is also quite interesting to note that men and women do not differ significantly in their estimates.

What about the Supreme Court? People tend to know far less about the Court – they can name few justices and know little about its operating procedures. Do Denisonians know that there are 3 women sitting on the Court? A plurality do, yes. About 40 percent picked three, while most of the rest picked 2 (~35%). Only 10-15% picked more than 3 and, fortunately, very few picked 0. Being one off is not bad. 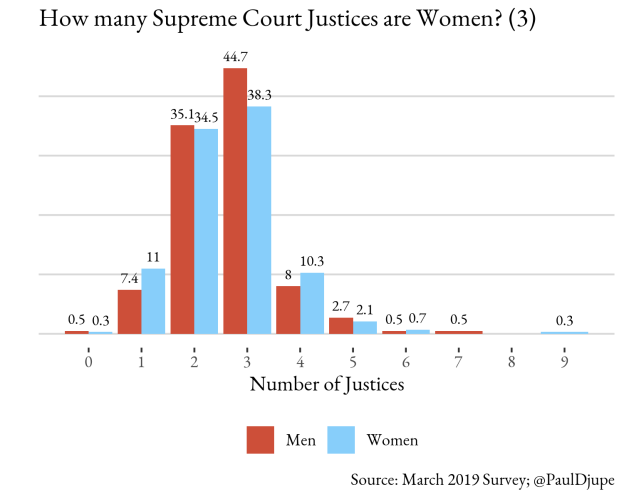 Were they telling the truth? I would guess so – our campus is quite politically engaged and informed and the rise of women in politics has been a big story during the Trump presidency. But I still wanted to check since this survey was administered online and nothing, besides pride, prevented respondents from popping open another tab and doing a quick search. I thought that illicit searching behavior might show up as taking longer to complete the survey.

However, the longer the survey took, the worse was the respondent’s guesstimates about women’s composition in legislatures (I took the average difference of their scores from the correct figures). But survey timing measures are notoriously noisy – there are a lot of reasons why it might take awhile – so this is not conclusive and instead suggestive that respondents weren’t looking up the answers.

I also wondered if more engagement with norms about women in society would be linked to their knowledge about women in politics. The survey asked three versions of, “I have had a conversation about gender expectations and norms at Denison [in class/outside of class/with my parent(s)]”. Only 25 percent have not had such a conversation in class, 16 percent haven’t outside of class version, and 42 percent haven’t at home — interesting, right? There is no relationship of this measure of engagement with gender and society and knowledge about women in politics; it also is not particularly salient with men or women. Perhaps this isn’t surprising since it’s about interpersonal relations rather than gender and institutions. The only factor that is related to a more accurate answer is GPA.

Once again Denisonians prove their mettle by being on top of political trends. It’s tough to say that knowing one fact is more important than another, but being aware of gender imbalances strikes me as key to reimagining the political future. More women are running for public office and more women are holding leadership roles, reshaping what is expected and what can be. In many ways, I hope that society some day puts my Power and Gender course to rest.

Paul A. Djupe is a local cyclist who coincidentally has taught social science research methods and political science at Denison for millenia. He started onetwentyseven.blog a few years ago in a bid to subsidize collective action. He’s on Twitter and so should you.