Exploring the Relationship Between Wealth and Involvement Type & Quality at Denison

By Tim Dowling & Paul A. Djupe

We’ve all been there. Whether it be at graduation, an informal Slayter meeting, or a reception at Monomoy, we’ve all heard President Adam Weinberg’s remarks on student involvement. Adam praises involvement, saying that it is one of the things that makes this University so great. He encourages every student to take a risk and join a club so they can be exposed to new people and ideas, develop invaluable leadership skills, and truly feel like they have an impact on this campus. However, this begs the question: is all involvement equal? More specifically, do some organizations provide their members with more leadership opportunities and encourage participation more than others?

Alongside Adam’s remarks about involvement, you may hear some from him pertaining to wealth diversity at Denison. Denison provides generous scholarships to many of its students, resulting in a student body that has a high degree of variation in income backgrounds. Do all students buy in to the involvement track to success? Can success be bought?

Greek organizations are a natural counterpoint to social justice groups especially since sororities and fraternities charge hefty dues, so surely upper class students would be more likely to be members. The figure below confirms that relationship. Almost a majority of upper class students are Greek members, while only 17 percent of those identifying as lower class are members. And there’s a class cut-point. Both upper and upper-middle class students are about twice as likely as the rest to be Greeks. 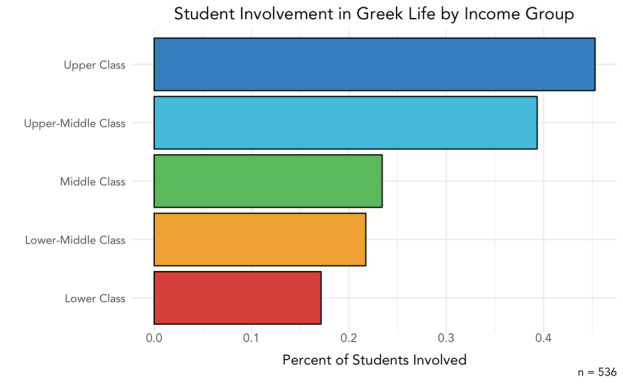 One of the critical benefits of involvement is that it allows many members to practice leadership skills. In the way that social scientists talk about it, group involvement “subsidizes” the experience you would otherwise gain in higher education. Lucky you, you can get both. Anyway, perhaps upper class activity is not geared to subsidies. The graph below shows the amount of “leadership” by our measure that students involved in each group type report. Of course most are involved in multiple organizations, so we can’t say that the source is greek life, for instance. When we look at the groups we have previously explored, it appears that those involved in greek life have a score of 3.6 which is slightly above the average of 3.28, but that those involved in social justice groups have the highest amount of leadership (4.2) out of any other organizational affiliation.

These results suggest that lower class students are much more likely to be involved in groups that promote social equality, are inclusive, and free of charge, like social justice groups. Conversely, we found that the wealthier Denison students are much more likely to get involved in groups that are inherently exclusive and expensive, such as greek life. We initially brought up the question if some organizations provide their members with more leadership opportunities and encourage participation more than others. According to the last figure, this may be true, however, wealthier Denisonians are not able to “buy” their way into organizations that give them more quality involvement (e.g., leadership). Although there is a large disparity between what kind of groups wealthy and poorer students join, there is little difference in terms of involvement quality. And, in fact, groups that lower income students are more likely to join, like social justice groups, actually give their members more involvement quality. At Denison, it is likely that not all students have the economic means to join any organization of their choosing, but one can rest assured that the more exclusive, expensive groups don’t inherently provide their members with advantages, at least in terms of leadership. What you get out of an organization is what you make of it, not what you pay for.

Tim Dowling was having a blast as a history major until for some reason he’s still a bit unsure of, jumped over to the world of data analytics. You can likely find him playing Smash Bros. in his sixman.

Paul A. Djupe is a local cyclist who coincidentally has taught social science research methods at Denison for millenia, like literally forever. He started onetwentyseven.blog a few years ago in a bid to subsidize collective action.