By Paul A. Djupe and Zach Broeren

At almost every turn, Denison crows about the Knowlton Center. The result of a serious gift, Knowlton promotes career readiness in a wide variety of respects, including resume advice, helping understand career options in the “Journey Program”, financial literacy, and financial support for students to take unpaid internships, among other things. At 127, we are concerned with whether the student community is involved with these programs and whether it seems to be making a difference. Are students involved with Knowlton, what do they think about Knowlton, and are they feeling more career-ready as a result?

It is surprising just how much of campus has been involved with Knowlton (“start early”!). And it’s no surprise that there is a major rise from freshman year to senior year, starting with only 39.4% of current freshmen utilizing the Knowlton Center rising all the way up to 85.2% for seniors, a 45.8% difference. What is perhaps most interesting is that the biggest jump (by 30%) is from freshman to sophomore year. It’s no surprise that as Denisonians get closer to the end of their time on the hill they feel more pressure to secure jobs/internships and, as a result, turn to the Knowlton Center to help get them. But huge numbers of students are starting early. What our data can’t tell us, however, is whether they continue to use Knowlton or are one and done.

A simple measure of perceived effectiveness is whether students like Knowlton more once they’ve used it. There’s clearly a bump after freshman year, once students have started to engage with Knowlton. But it also doesn’t keep climbing. In fact, by senior year there’s a bit of bifurcation  –  some really like it and some seem to have retreated to be on the fence about it (though our data don’t allow us to assess a change from a previous level).

While those who are farther along in their Denison careers feel more warmth towards Knowlton and use it more, do they actually feel any tangible benefits? Across all four class years, there is a higher feeling of preparedness among students who utilize the Knowlton center compared to those who don’t. Across all four class years, the mean response for those who don’t use the Knowlton Center barely changes, staying at just below “Neither Prepared or Unprepared”  –  basically a shrug. Oppositely, freshmen through juniors who use the Knowlton center have a similar mean response score just a bit higher than those who haven’t used Knowlton. The feeling of preparedness for seniors who use the Knowlton center is much higher. Still, there are very few across the board who think they are “very prepared”  –  just 7 percent overall and 15 percent among seniors.

Maybe so many students shrug about their preparedness because they’re not particularly worried about it. Well, we asked that question and anxiety about the future is substantial. Two-thirds of students say they agree or strongly agree that “I am worried about job searching and launching my future career.” Only 14 percent are on the fence (the shrug response). Does use of Knowlton allay those fears? Not really, except among seniors –  see below. And even among seniors that anxiety doesn’t dip much if they’ve used Knowlton. This is not surprising because the unknowns are awfully unknown until senior year, and sometimes very late into the senior year. Don’t worry  –  Denison’s alumni stats strongly suggest you will get a job in your field, though that doesn’t feel real until the offer is in hand. 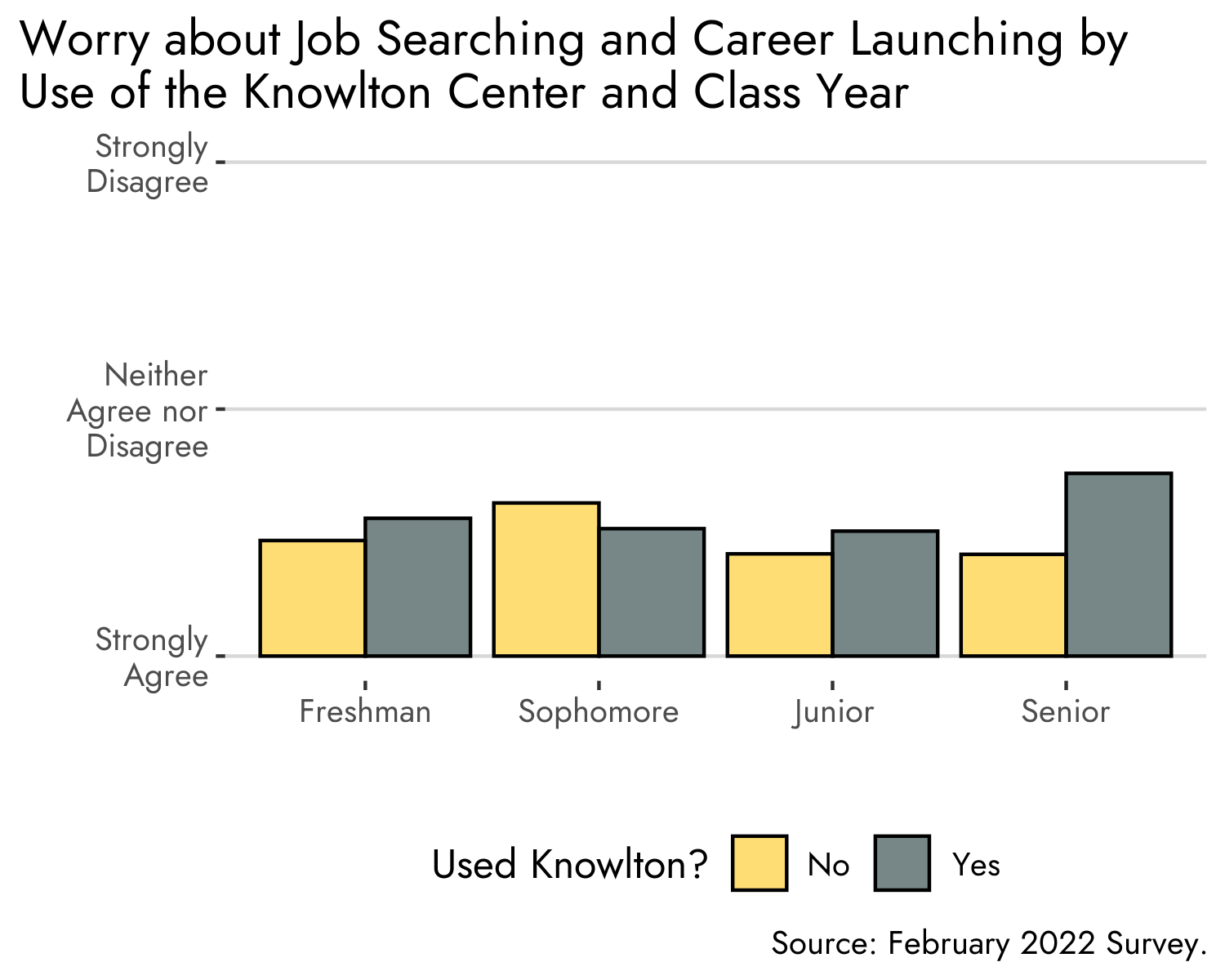 We don’t have these data for other schools, of course, but it’s not hard to imagine what they would look like if those institutions did not have the campus reach and resources of the Knowlton Center. Still, anxiety runs high among students about launching their careers and that is probably well-founded. Yes, Denison statistics indicate graduates will get jobs in their fields. At the same time, those statistics are built on hustle fueled by the same anxiety you are feeling. Previous graduates also had to apply for lots of internships and jobs, they had to beat the bushes to find and establish contacts, and they had to work hard laying the groundwork by developing their personal narrative and finding a path forward. So, you can too and it seems that Knowlton can help.

Paul A. Djupe is a local cyclist who runs the Data for Political Research minor. He started onetwentyseven.blog a few years ago in a bid to subsidize collective action. He’s on Twitter and you should be too, along with your president.

Zach Broeren is a resident customer at Denison University (also known as a student) who is fascinated by quantitative political science research and writes for 127 to help fill his need.