Denison smells. More specifically, Denison smells, often, like a musty fiery skunk. I first noticed this aroma in my freshman residential hall and attributed it to marijuana soon after. While I understood marijuana’s scent inspired its fair share of criticism, it didn’t bother me too much. At the time, weed smelled like a Friday night on campus or the beginning of an enthusiastic concert. More recently, however, I have begun to recognize that marijuana at Denison also smells like privilege.

Outside of Denison, America’s war on drugs is well documented. It may have passed its heyday, but the U.S. penal system still frequently blocks pathways to upward mobility in response to marijuana-related drug offenses. Specifically, millions of Americans lose their jobs, their public benefits, and their freedom each year as a penalty for their use of marijuana. Notably, these policies disproportionately impact lower income and Black communities. In fact, although Black and white Americans smoke roughly the same amount of marijuana, Black people are four times as likely as white people to be arrested for possession of marijuana. Yet, at elite colleges like Denison, police rarely sprint to campus to handcuff pot users. With this in mind, we at onetwentyseven were curious about the nature of marijuana usage among Denison students.

In fourth grade, a DARE officer warned me that marijuana dulls minds and removes motivation. Denison students defy this characterization. That is to say, there is no evidence that Denison students who smoke marijuana are more lazy or less intelligent than their non-smoking peers. For example, no real relationship exists between smoking and working out or studying at Denison. While marijuana users tend to have slightly lower GPAs than non-users, these differences are not statistically significant and certainly do not prove that smoking marijuana causes lower GPAs. Claims of causality are especially suspect because heavy users of marijuana are more likely to engage in other potentially distracting social activities such as binge drinking.

Still, anti-drug campaigns often don’t just associate smoking marijuana with certain kinds of behaviors; they frequently associate it with certain kinds of people. In particular, some media and some politicians push forward the notion that Black people and people with low incomes are inherently more drawn to marijuana. At least at Denison, however, these stereotypes appear to lack validity. Although Denison includes students from a wide range of backgrounds, all students live in a relatively similar environment. In this similar environment, students use marijuana at similar rates regardless of race or class. That said, this similar rate is far higher than national averages. While the average American does not smoke marijuana at all, the average Denisonian smokes roughly 10 times a month. 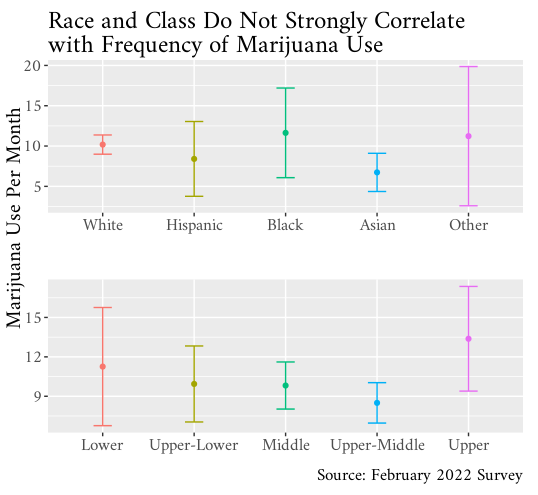 There are multiple approaches to recognize Denison students’ privileged access to marijuana. Potentially, Denison could launch its own war on drugs. Under this plan, campus safety officers would carry additional resources and responsibilities that would allow them to routinely make drug busts across campus. This solution, however, appears less than ideal when seen in the broader context of the war on drugs. The United States already exemplifies the many troubles that authoritarian drug policies carry. As previously demonstrated, marijuana use at Denison is not associated with enough issues to merit this problematic war on drugs.

Alternatively, public officials could continue to surrender the war on drugs. In this case, privileges Denison students afford would transform into rights that all Americans hold. This solution, however, takes effort. It requires continued mobilization and voting. Denison students alone cannot end all unjust drug penalties, but this should not excuse students from taking any action whatsoever. The same smell that provides relatively harmless fun for Denison students, provides harmful penalties for many other Americans. Some can smoke weed because they attend an elite college, but others cannot attend an elite college because they smoked weed. Hopefully, students will play their part in building a world where weed smells less like privilege and more like liberty.

Shayne Silver-Riskin is a senior, a political science major. He’s a joker, but not a smoker, nor a midnight toker. Nevertheless, he doesn’t want to hurt no one.