On a rainy day my freshman year, I had my umbrella stolen from me not only once, but twice in the span of three hours. The first person who borrowed it without permission was nice enough to return it, but the second borrower did not. While it took some effort, I was able to recover my stolen, albeit now broken, umbrella. At the end of the day, however, a lot of the blame is on me: I lived at the end of my hall, far away from any exits or disturbances to anyone walking through and thought it would be safe to leave my umbrella out to dry unattended in the hallway, which proved to be wrong.

Stories like mine aren’t rare, unfortunately. Sometimes it’s much smaller stuff, such as people walking off with pens, folders, or other easily replaceable things. Sometimes it’s much more serious, such as people taking airpods, computers, or even stealing hundreds of dollars from someone via declining. With this looming threat of theft, do Denison students trust other Denisonians? In the February 2022 survey, we asked several questions regarding trust and leaving valuables unwatched.

When looking at the difference between the two questions, 70.2% of Denisonians either choose Most of the Time, About Half of the Time, or Some of the Time for leaving valuables unattended, while only 36.5% of Denisonains chose middle options for leaving a door unlocked, a 33.7% difference. I would imagine this is most likely because there is more at stake to leaving a door unlocked; you give a potential thief full access to what you have, while leaving a valuable unattended only puts that one valuable at risk. 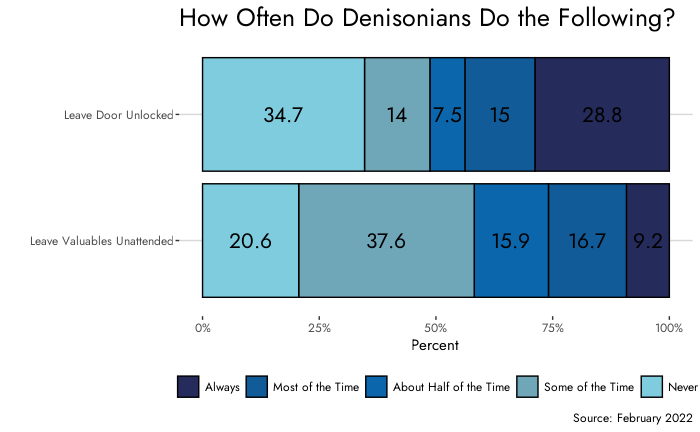 The obvious reason why many people choose to not leave valuables unattended or their door unlocked is because of the financial risk involved. As a result, Denisonians who are more wealthy may be less likely to take measures to prevent theft since they can more easily replace stolen items. Does this theory hold up? According to our data, there are some trends, but not as clear as the previous graph. As students move up classes, there is a rise in the likelihood they leave their door unlocked while there is a lower chance they leave their valuables unattended; until you get to the upper class, when there is a clear rise in the likelihood they leave valuables unattended. A potential reason for higher class students to leave their door unlocked may have to do with a break from habit. Students from lower socioeconomic backgrounds will probably be more likely to grow up in more densely populated and higher crime areas and when shifting to Denison they may not feel a need to lock their doors anymore. On the contrary, students from higher socioeconomic backgrounds most likely come from suburbs or gated communities and suddenly feel the need to lock their doors when living in much more densely populated areas. 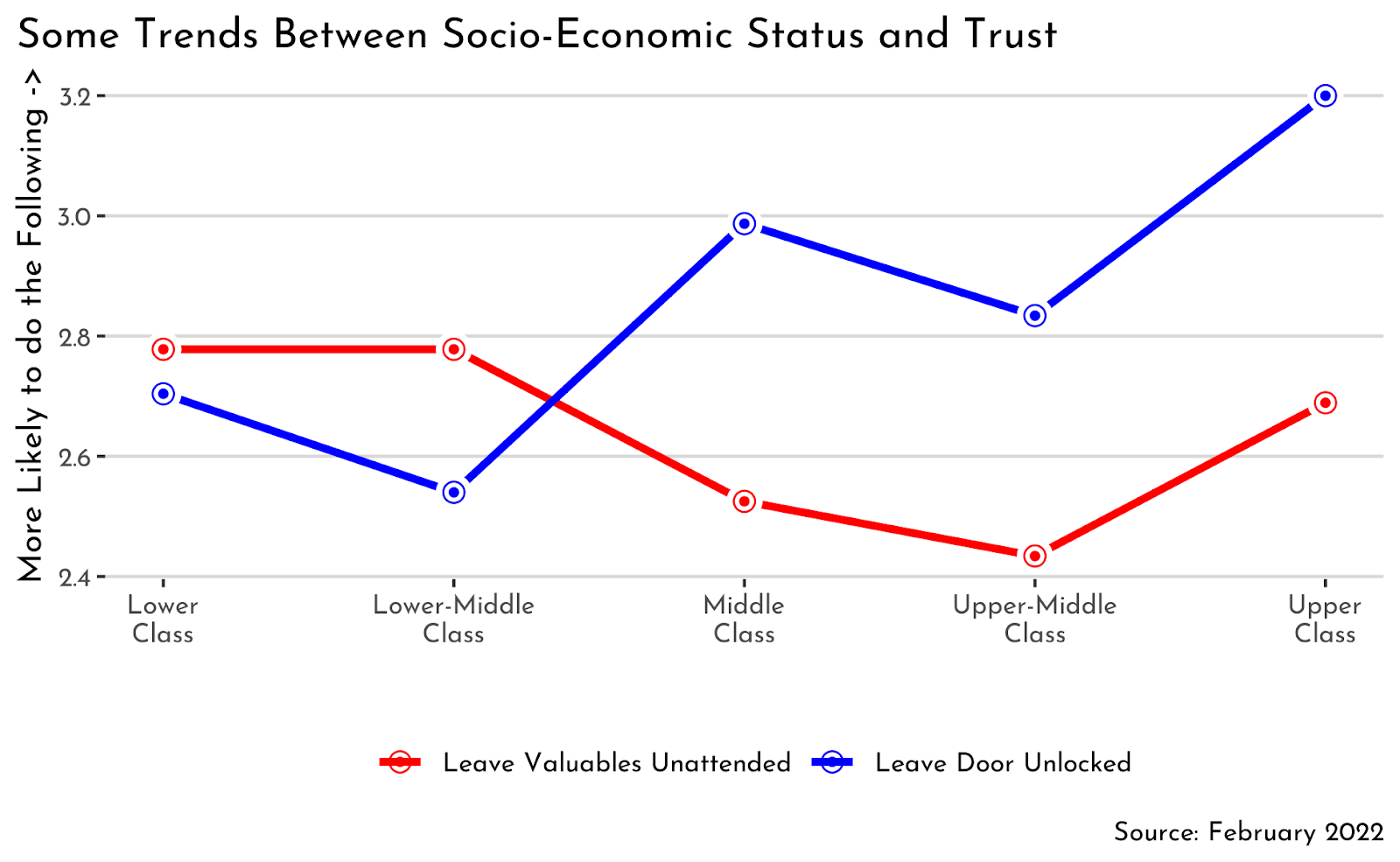 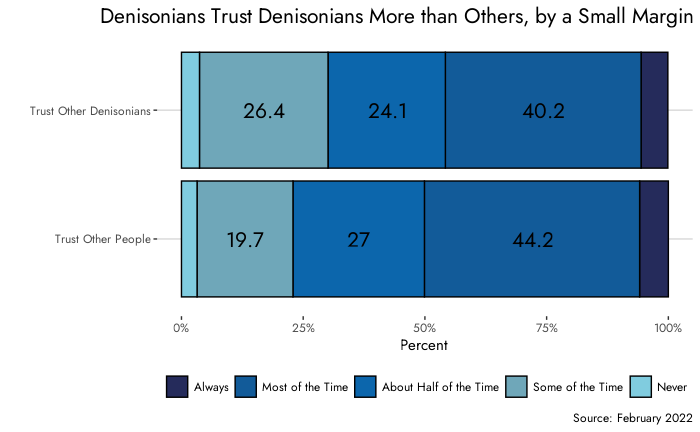 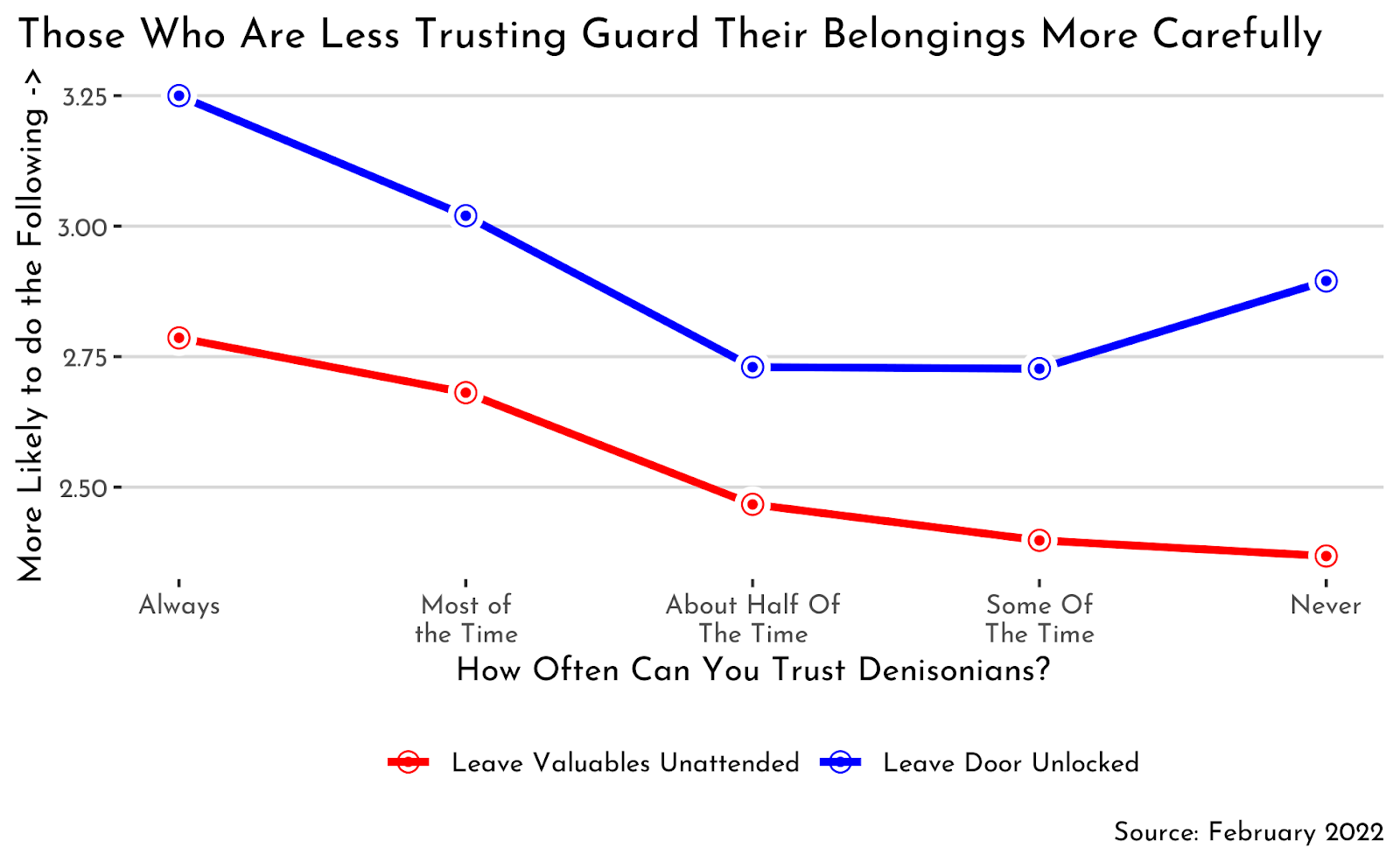 Do Denisonians trust Denisonians? Generally speaking, not really. More Denisonians indicated higher levels of trust for other people over Denisonians, while less than 10% of all Denisonians always leave their valuables unattended. The unfortunate part of this situation is there does not appear to be ways to remedy this. For starters, outside of sensitive data held by campus safety, no one really knows the trends in terms of theft and who is committing the theft. If persons who are committing theft aren’t caught by Campo, then it rests upon friends of the thief to help remedy their friends actions. But, in my opinion, many times friends not only do not care about other friends’ shitty behavior, they actively encourage it or at least vouch for them.

Zach Broeren is a Junior at Denison who is looking forward to working with Dr. Djupe on his summer research project.