In the October 2021 survey, we asked two questions relating to vouching for a friend. The first asked respondents if they had vouched for a friend who was accused of wrongdoing, while the second question was the same exact as the first, but included a clause at the end indicating that you knew that your friend was guilty. 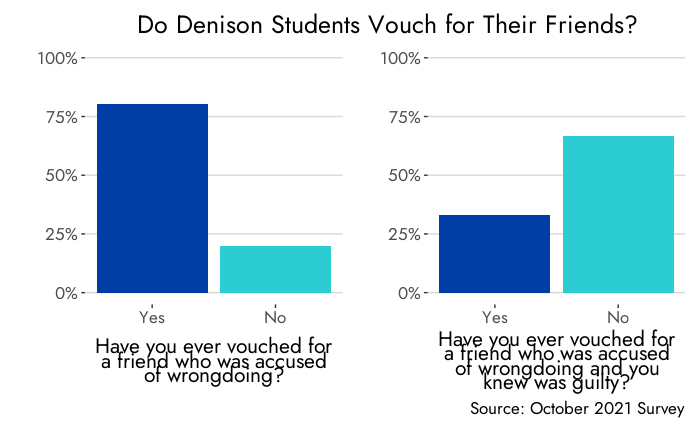 Some people argue there is a “bro-code” among guys to help protect each other from wrongdoing, while others argue they have incorrect assumptions about gender. Well, who’s right? Technically, both of them. Women had slightly higher rates of vouching for a friend under normal circumstances (81.2% compared to 78.9% for men). However, looking at the second question yields different results, where 35.4% of men had vouched for a friend when they knew they were guilty as compared to 31.2% of women. The reason for this reversal may be quite complex, but suggest that men do in fact have a bro-code, while women are more willing to go out of their way to support friends when they do not know the full details.

Vouching isn’t a free-to-play game; sometimes there are consequences for going out of your way for your friends. Whether this be from blowback from administrators or negative outlook by peers, there can be consequences at play. These consequences may affect races differently; the ability to hold discretion over someone after the fact may influence someone’s decision to vouch, if the person vouching believes that the accuser may look more harshly on them because of their race.

Unlike gender, there is a clear divide between racial groups for both questions: whites indicated they’ve vouched for a friend more often than non-whites – 20% more in normal circumstances. And this pattern holds true when they’re guilty too, where 34.2% of white respondents had vouched for a friend they knew they were guilty while only 29.8% of non-white respondents had. Another possible explanation for this is that white people commit more violations than non-whites and have more opportunities to vouch for their friends. When looking at violations committed, 38% of Whites have committed at least 1 violation while only 22% of Non-Whites have committed at least 1 violation.

Greek life gets an incredibly harsh rap (whether deserved or not) for being some of the most protective groups on campus (that is in terms of protecting their group members). This makes sense as Greek life is a unique scenario where they are constantly susceptible to a group member committing a violation. From underage drinking to hosting parties with no cameras around and only their friends watching, Greeks may have to vouch for their friends more than others. Does anecdotal evidence hold up to what the data says? 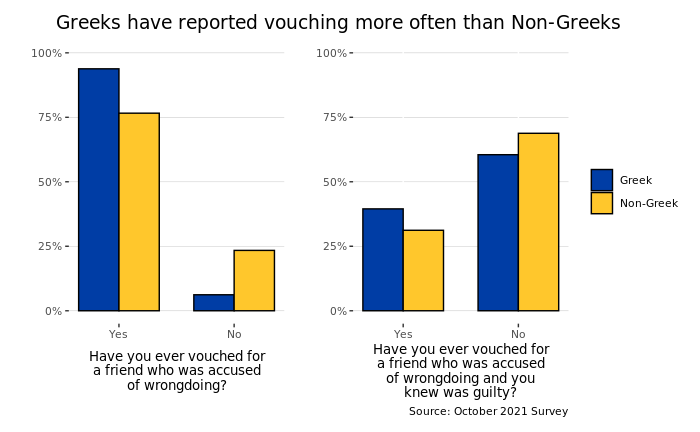 The results from this question in this survey are quite interesting but also signal a change in future iterations of the question. Most of the results were quite unsurprising, as Greeks could generally be expected to vouch for their friends more as they are in scenarios in which they would need to vouch (throwing parties, serving alcohol underage, etc). That point leads me to what I believe is a problem with the questions we asked: they did not gauge willingness to vouch for a friend, merely if someone had vouched for their friend. Future changes in the question should either ask about one’s willingness to vouch for a friend or further questions on top of the status quo that ask about how many times they have had an opportunity to vouch for a friend. These future changes should provide a more robust analysis of Denison morality.

Are Denisonians discerning moral agents? Are some Denisons more discerning than their peers? Is being loyal to a friend immoral? I think just about every reader would give different responses to these questions but that doesn’t stop me from making generalizations about the data. Overwhelmingly, it appears that all types of Denisonians (at least a majority) have vouched for a friend in the past, with a significant drop off when they knew they were guilty. This is an area that I hope we get a chance to explore more in the future and, with some modifications to the questions, should provide some really interesting results.

Zach Broeren is a Junior at Denison denying the reality he will be graduating in a year.