On August 25th all students received an email from Student Life titled “Welcome to Fall Semester 2021.” They open the email with: “As we launch into another year, we want to remind you of a few important campus policies and documents we ask you to review.” Naturally, the first thing Denison students do when they arrive on campus after summer is crack open the riveting Student Handbook and hunch over their desk to feverishly digest all the policies they need to abide by! Along with the expectation that students are well versed in the seemingly endless policies within these documents, we have all knowingly or unknowingly signed the Student Residence Agreement: “This agreement is a legal and binding contract, and you agree to the terms of this agreement when you submit your housing application.”Just how much do we know about these policies?

Drawing on just acquired data from a sample of about 400 members of the student body, I will focus on students’ knowledge regarding the policies within the Student Handbook, the Code of Student Conduct, the Housing Policy/Residence Agreement, and the protocols for Responsible Hosting of Social Events.

The figure below shows correct answers regarding the listed policies. At least 60% of students correctly answered fire-safety-related violations including vaping (84.5%) and hanging items over pipes, windows, and ceilings (the Granville fire department would be proud!). Most students seem to know quiet hours, most likely due to the fact there are posters scattered throughout residence halls. Additionally, 71.4% of students know you do not get a reimbursement for withdrawing from the University, which checks out due to the financial seriousness of attending any college in the U.S. And 68.1% of students know it is not permitted to run a business from your dorm room due to potential healthcode violations and lack of proper permits (but it also ensures a cheap labor force on campus).

However, the exciting metrics of the survey are where students scored low, because it shows where Denison needs to raise awareness. Less than half of students know (47.6%) that if you have registered a party space you are solely responsible for any damages that might be incurred. This might be due to the fact that a small percentage of the student body is safe-host certified and is interested in organizing a social event. Regarding Denison’s right to search your room anytime, about ⅓  of the student body scored correctly. Denison reserves the right to search your room anytime, but would only do so if there was a cause to search your room; however, this is not exactly advertised because it evokes totalitarian vibes and surely a large majority of Denison students would never qualify for a justified room search.

The lowest number of correct responses was for “Guests in Room” where only 24.6% of students scored correctly. I found this metric to be the most compelling. How could it be possible for students who largely scored well on many of the policies to not know how many people they can have in a room? I would say a lack of communication from Denion’s administration. When I was a freshman, this number was 30, but it has been steadily changed by Denison’s administration without much recognition. This rule was changed to promote the use of Denison’s designated social spaces, to reduce the structural damage incurred by parting in residence halls, and for safety concerns (which create bad press and possible legal costs for Denison). It seems that this rule change regarding the number of students in a single room (to 15 – but I counted as correct answers from 14-16) was changed for economic reasons disguised as social inclusivity and safety, which is fine. But Denison Admin needs to do a better job about raising awareness of this rule change.

What helps explain why some know the Handbook better than others? Maybe it’s getting in trouble. The graph below shows the number of student code of conduct violations (y axis) and correct Handbook knowledge responses on the survey (x axis). It’s clear from the results that getting caught is not a learning experience for Denison students – they don’t end up knowing the Handbook better. This pattern probably does not align with the goal of the conflict resolution office outlined on their webpage:

“We help students connect with campus and community resources to redirect them toward more positive behaviors. Committed to restorative principles, we provide opportunities to resolve community disputes through healthy confrontation of choices and honest dialogue.” 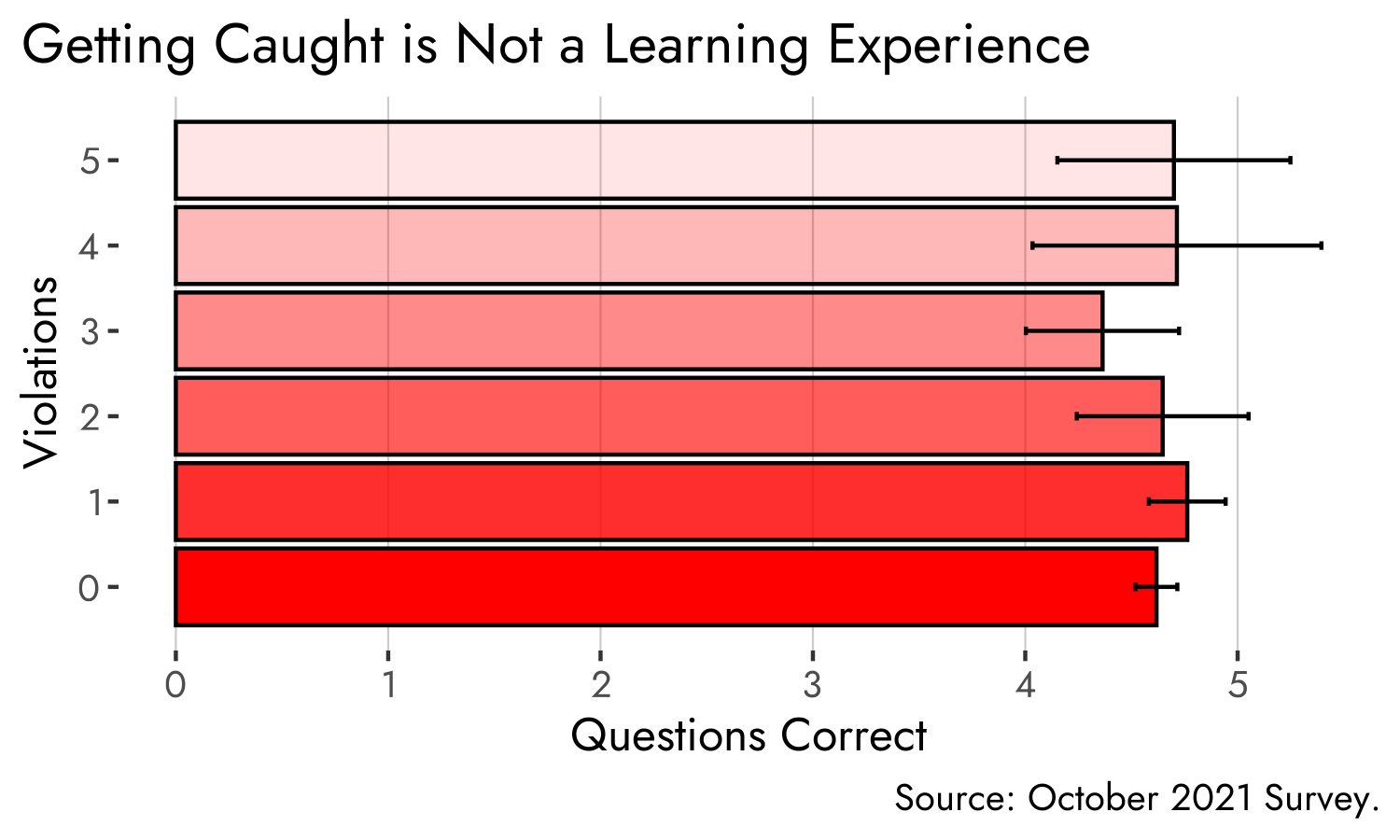 Based on survey results it seems students do not come away with an epiphany of altering their moral/ethical behavior following a conflict resolution meeting, but rather come away thinking they need to do a better job of not getting caught. This metric is possibly because students who do violate the code of student conduct are exposed to the rules they broke and have punishment aimed to increase their knowledge regarding the rules/policies of Denison. Either way, I hope people can see the satire within the statistics regarding violating the rules but still knowing rules.

When examining correct responses on the survey, we also thought it would be helpful to see if where students live/what year they are in affects the amount of correct answers they scored. Broken down by quad, there is no apparent trend in the data. Possibly the low results on south quad could be due to the fact that there are only two dorms located there, Stone and King Hall. East Quad, with its mix of freshmen and sophomores, has the highest number of questions correct. North quad full of seniors is close behind. But there appears to be a trend by grade. Freshmen know slightly less about the policies than the other grades for the obvious reason that they are new. Based on these findings, knowledge of the Handbook looks about evenly spread across campus and accrues a bit the longer you’ve been on campus, more as a result of social interaction and less from direct experience with The Law. 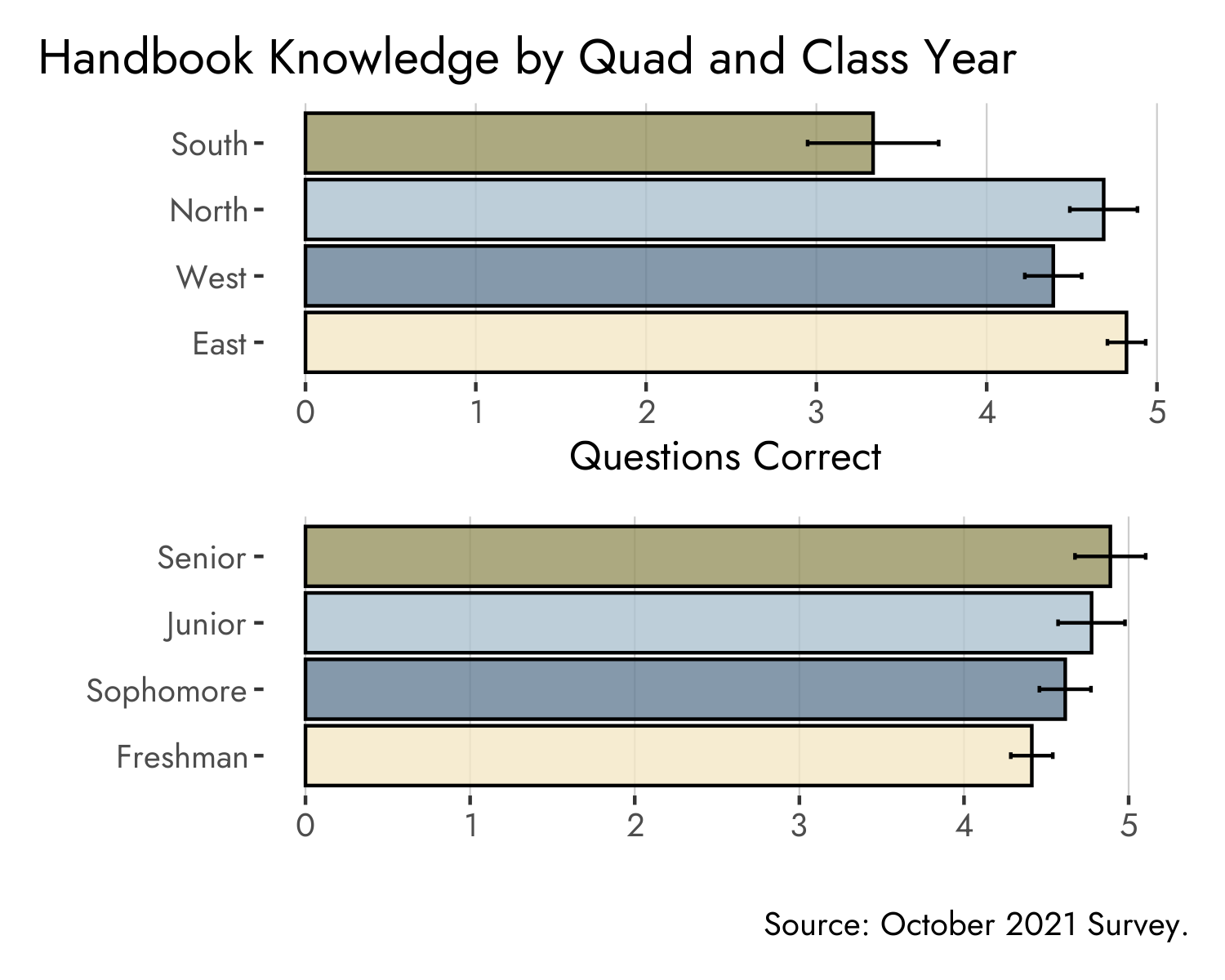 I will be honest, students scored way better than I had expected! As a reward, I will offer some closing metrics that were not included in the graphs above. For one, women scored slightly better on the student Handbook questions in general than their male counterparts. Also, the survey found students involved in organizations know the rules better, so more involvement generates more correct answers. Based on this survey, it seems that the Denison student body knows the rules relatively well. However, there are some policies that need to be better known, such as the room guest limit. The clash between student life and student administration is a tale as old as time, which has served as the basis for many coming of age college stories. However, at Denison we know the rules! Mostly…

Gus Hoffmann is a senior at Denison University where he majors in Global Commerce and serves as a ghost writer for Adam Weinberg’s Community Update emails.