I drink black coffee. I started this painful journey when I was responsible for twenty-two six year olds at a traditional summer camp up in the northern woods of Minnesota. I started drinking black coffee because I had nowhere else to turn. I needed caffeine and I needed it fast so I skipped the long process of making a beautiful swirl with my Oat milk and caramel drizzle and cut right to the chase. For me, coffee is a box to check off in the morning, but for friends and for my father, coffee orders are an intricate part of who they are as men and women.

At Denison, the coffee bar in Slayter Union is a social experience. I remember being a freshman and standing with multiple older students all waiting for coffee. I waited for my name to be called and watched as many students retrieved elaborate coffee orders that seemed to consist of really no coffee at all. I grabbed my iced black coffee and went on with my day. Looking back on the good old days of freshman year, I remember the people surrounding the coffee bar being primarily women. However, now being a senior and doing coffee runs around campus, I find myself encountering men ordering drinks full of milk and sugar more often than women. But do those components make coffee more feminine? And do these senior guys think of their orders as feminine? I guess we won’t know until we ask. Fortunately we did ask this past spring.

Not many of these items were seen as masculine, but I’ll bet you can guess which ones were – trucks and beer. It’s interesting that Denison women see those as somewhat less masculine than men do. But the bigger story is that, across the board, men and women basically agree on everything, suggesting how powerful these gendered notions are ingrained in us.

Of particular importance to students, some of the things that suggest organization – using a calendar, cleaning, and studying – are seen as more feminine. Aside from the gendered lean of “pink,” cleaning and keeping a calendar are the most feminine actions in the list. Perhaps it’s redeeming that men think those conscientious activities as less feminine than women do. And about that latte – it’s seen as feminine, and men are more likely to think so.

These results are interesting, but do they matter? I wanted to see if believing the gender identity of a product/action as normative for your gender is linked to doing more of it. So, for example, the data show (below) that men who see studying as more masculine have a higher GPA, as do women who see studying as more feminine. These aren’t small effects either, though there are not a lot of people on the ends of the spectrum. From seeing studying as the most masculine to the most feminine is linked to .5 points higher GPA among women. That’s a lot. 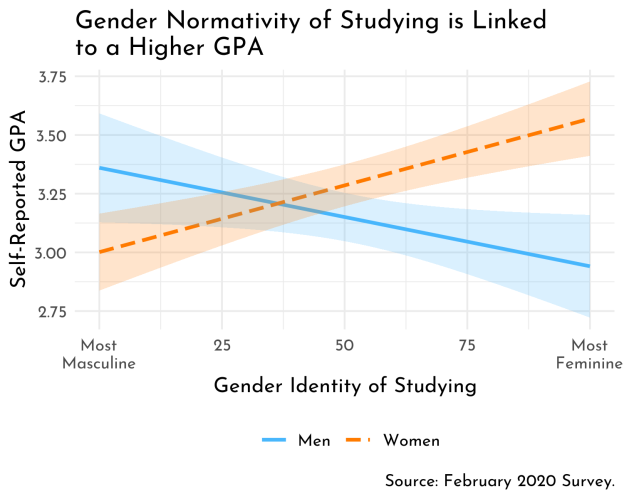 We can also link these notions to drinking, which the following figure shows. Here the results differ quite a bit by the type of drink consumed. Seeing beer as more masculine is linked to more consumption by men but not women. But both men and women consume more when they see mixed drinks as more feminine.

After Jennifer Garner came to speak at the 2019 commencement ceremony, 127 did some research on gender. We found that gender is tightly linked to gender identity – men identify as more masculine and women as more feminine. This is curious because men and women differ little on traits like compassion, aggression, warmth, and risk taking that are thought to be gendered. Maybe our gender identities are more wrapped up in things (beer) and actions (cleaning) rather than how we treat one another. If gender identity is a superficial, conspicuous badge we wear, I wonder what others think about gender identity transgressors.

Sarah MacKenzie is a senior Political Science major from Denver, Colorado. If she is not talking about climate change she is urging the people around her to vote in the 2020 election.