By Emily Nicholson and Elena Meth

In January, The New York Times published an opinion piece entitled “A Frat Boy and a Gentleman” by Alexandra Robbins. If you haven’t read it (although, you totally should), the article basically reaches the conclusion that fraternities across America are changing, specifically by embracing a “more inclusive form of masculinity.” Though by no means do we think Robbins is suggesting fraternities, and college campuses more broadly, have solved the toxic masculinity issue, we would agree that the article does a nice job of conveying that campus culture is never stagnant. Right now, at least on Denison’s campus, we are evidently in a point of change in how we understand sexual respect and how we deal with sexual misconduct. If the frat boy is truly on the path to becoming a gentleman, is this now colleges’ way in for new sexual misconduct policy?

We are both SHARE Advocates, so it feels important to note that we likely have stronger views on sexual misconduct policy than many Denisonians. I (Elena), though, have seen a dramatic increase in sexual respect dialogue, willingness to participate in prevention and survivor care trainings, and more engagement from faculty and staff on the topic. President Weinberg has been especially vocal on the topic, publicly asserting that he wants Denison to become the first college campus in the country that has 0 sexual assaults (based on earlier reporting, that figure is far from 0). In February, several students worked with Dean Fox and Dr. Rebecca Homan of the Biology Department to put on the campus’s first campus-wide Sexual Respect Dinners which were attended by nearly 200 members of the community, including alumni and members of the Board of Trustees. We could go on, but the point is Denison has been making clear efforts over the last four years to be a leading college on this issue. The question, then: Does all of this apparent culture shift translate to support in policy change?

In the October 2018 127 survey, we asked over 500 students questions about six possible policies the school could implement to support survivors and lower rates of sexual misconduct. Figure 1 presents the distribution of those results, showing that students demonstrate strong support for increased sexual respect dialogue, a rape crisis center at Whistler, and more frequent and transparent information about Title IX investigations being made available. Less strongly supported is mandatory bystander intervention training each year and increased Title IX postering around campus.

Figure 1 — The Distribution of Support for Sexual Assault Prevention Policies

What we can tentatively conclude from the results is that students show stronger support for policies which require no direct action on an individual basis. Increased sexual respect dialogue, a rape crisis center at Whistler, and more frequent and transparent information about Title IX investigations would all be positive steps towards improving campus culture. However, it seems that participation in each of these policies would hinge on students’ self-selection, therefore likely only impacting a small cohort of students rather than the student body as a whole. And the group of students who would choose to participate in these policies would most likely already be educated on the topic and active in prevention work. We know there are a lot of students who already care and show up, but there are also a lot of students who don’t show up for myriad reasons, so this raises the question towards whether policies which do not impact the entirety of the student body can actually effect widespread change, or if they only reinforce an echo-chamber.

Students’ level of support for mandatory annual bystander intervention training supports this idea as well. While not nonexistent—most students do strongly support such a policy—the level of support varies more for this proposal than the others, with many students who at least weakly oppose it. If students are less likely to favor policies which force them into action, then it makes sense that they would be less supportive of this measure. Bystander intervention education is an effective way to educate students in preventative measures. However, like all education, it requires time and attention, two things it seems that students are less willing to sacrifice towards sexual misconduct prevention. This makes sense. Especially for students involved in Greek Life or on athletic teams, the amount of education of this type can seem a bit saturating. Overall, many students support this policy, however, there is a significant group who would rather not see it implemented, leading us to question how to shift the connotation surrounding “mandatory” programming as a chore or something students have to do.

Increased Title IX postering received moderate support from students, although not as much as the first three items in Figure 1. The wider variance in support for this policy might be reflective of the fact that, compared to the other policies listed, increasing the number of posters on campus could seem like a less effective change. Students might support it less because the prospects for success here seem weaker than through the other more intensive policies. Most students still support the policy though, which is likely reflective of the low commitment which it would require from the general student body. Again, this policy would rely on self-selection of students who want to get involved with making and hanging posters, which usually implies a pre-existing level of interest and knowledge on the topic. Though postering efforts have the potential to effect change, students’ preference for another policy which does not require direct individual action reinforces our concern with small group action in lieu of widespread change in campus culture.

The question also contained an experiment: Half of students randomly were asked whether they supported policies proposed by the administration, while half were asked if they supported the same policies, only proposed by students. Figure 2 shows the level of support for each policy as well as the difference in support between student and administratively proposed policies. The only significant difference shows a bit more support for the student-proposed policy for SHARE Advocates as hosts and doormen for campus parties, though overall respondents oppose this policy.

An explanation for this trend is that policies addressing sexual misconduct are often either interpreted as punitive or preventative. A policy which counters sexual misconduct through the presence of SHARE advocates when handed down by administration might feel like a punishment and an infringement on students’ social lives. Alternatively, the same policy backed by students is more likely to be interpreted as an uplifting, preventative measure, reflecting a cultural shift on campus. It makes sense, then, that students would favor somewhat more the uplifting signal of progress over an administration-imposed regulation. 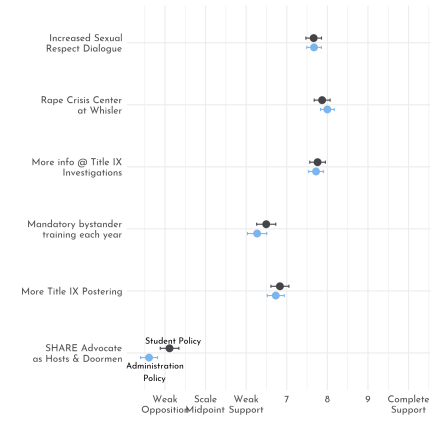 On the whole, we are encouraged by these results. It is promising to see high levels of support for policies which could positively impact our campus culture and make the hill safer for us all. However, the fact that many students are still resistant to a hands-on solution demonstrates a significant challenge. In order to truly create a change on campus, we all need to take a personal stake in the solution. Administrative or student policy alone cannot bring about a cultural shift. We might be a ways from President Weinberg’s lofty goal, but we hope these results show the start of a new era at Denison and a new era for colleges.

Emily Nicholson is an aspiring dog whisperer but is ready to fall back on political science if that doesn’t work out.