By Jacob Rains and Paul A. Djupe

At this point 1.5 years out from the 2020 presidential election, just about every Democrat has announced their bid for the Democratic nomination to challenge Trump. The New York Times reports that 18 candidates are in, 2 are likely, and 5 are still mulling it over. It’s an incredibly diverse field in comparison to past contests – 6 are women and 6 are non-white. For political junkies, it’s never too early to ask whether you have a preference. And what we expect to see if that students follow the zeitgeist that there’s a new generation of leadership ready and waiting and that some are just too old to run. So, is Denison paying attention and who are Denisonians backing?

It’s still early, so only a bare majority have a (perhaps tentative) candidate choice so far; only 16 percent say they wouldn’t participate in the Democratic nomination contest, which corresponds to the portion of Republican on campus. 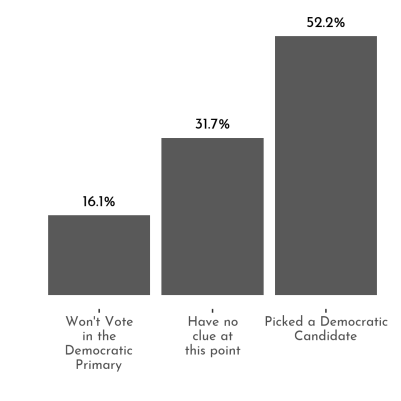 It’s no surprise that partisanship is linked to picking a candidate – Strong Democrats are the most engaged and the proportion engaged steadily declines from there. Notably, there are decent chunks of self-identified Republicans who picked a Democratic candidate!

Figure 2 – Who is Active in Selecting a Democratic Nominee? Who has an opinion, by Partisanship. 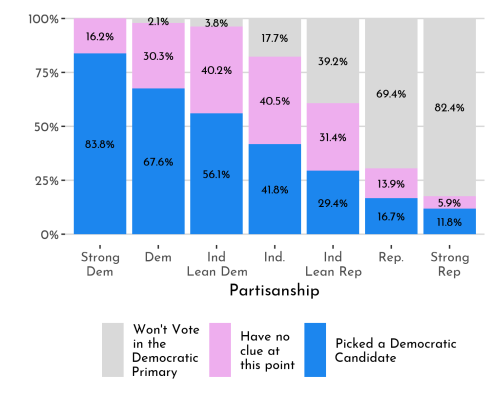 Finally to the main event – who gets the most support? Figure 3 shows that Denisonians prefer old white men. Joe Biden (who has not declared officially yet) and Bernie Sanders top the list with nearly a majority of support between them. Beto, who almost took down Ted Cruz in Texas and served in Congress for 6 years comes in third with 10.8%. Thereafter follow a bunch of candidates with high single-digit support – Harris, Buttigieg, Warren, and Booker. Denison students preferences are quite similar to the results we’ve seen in early national polls, with the only major differences being that Buttigieg (Boot-edge-edge) is polling about 6 points better on the Hill than he is nationally.

We shaded the bars by the average warmth toward socialism to see if ideology is influential in picking a candidate. The candidates are not enormously different from each other, but do differ, for instance, in whether they support Medicare for All (moving to government as the single-payer for health insurance). No surprise that Bernie supporters feel warmer toward socialism, and Biden partisans are less warm. Supporters of O’Rourke and Harris, somewhat more moderate candidates, are cooler toward socialism, while Elizabeth Warren and Mayor Pete fans are warmer. Must say, it’s refreshing to see that ideas matter.

But those are not the only lines on which people may prefer a candidate. While many of us thought that 2016 would be the breakthrough year for women, maybe 2020 will and that could be an important step for the equality project. The 6 women candidates have attracted just over 20% of support from those who have chosen already. It’s not too surprising to see that women are more likely to select a woman candidate – it’s about double the rate as (Democratic) men selecting a woman candidate (see Figure 4). That’s a significant difference.

Figure 4 – Preference for a Woman Nominee, by Gender, Among Those Who Have Selected a Candidate Thus Far

Figure 5 – Preference for a Non-White Nominee, by Race, Among Those Who Have Selected a Candidate Thus Far

The feud in 2016 that was so damaging to the eventual nominee, Hillary Clinton, was between party regulars and a candidate, Bernie Sanders, who had never identified himself as a Democrat. Will 2020, are we see a reprise of that same battle? The short answer is yes. There are some Strong Democrats who back Sanders, but his support grows the weaker their attachment to the Democratic Party. Interestingly, Biden’s support follows the same pattern. Instead, Strong Democrats like Harris and Buttigieg at much higher rates than any other group. Strong identifiers tend to pay much more attention to these matters than others do – do they know something that others will come to learn? We’ll see.

Figure 6 – Who Do Partisans Favor?

A recent Pew analysis found that Millennials and Generation Z will make up approximately 37% of electorate in 2020 giving them significant sway over both the Democratic Primary and General Election outcomes. Democratic candidates are fighting for this demographic with promises to make public college free, enact gun control, and push through a Green New Deal. Some of the younger and more diverse candidates have placed a specific emphasis on their identity in hopes of attracting the support of a generation that looks a lot more like them than Biden or Sanders, but so far they’re seeing little return from that emphasis among Denisonians and in the national polling. Ultimately, identity politics might not matter much as we expected with this field of candidates. Only time will tell here as candidates look to mold their arguments around their policy positions, electability, and experience with more than 9 months until the Iowa caucuses.

When not writing for One Twenty Seven, Jacob Rains can be found on the Track, running in circles pondering the true meaning of life.

Paul A. Djupe is a local cyclist who coincidentally has taught social science research methods at Denison for millenia. He started onetwentyseven.blog a few years ago in a bid to subsidize collective action.