The events at the University of Virginia in Charlottesville on Friday August 11, just before the rally in the town the following day, have sparked pointed conversations about the role of the university in public life yet again. University employees were clearly present at both events, though none apparently on the side of the white supremacists and Nazi sympathizers that provoked moral outrage among all but a few, including the US President. But UVA was still called in for criticism for failing to name the alt-right participants. Instead the president focused on the affront to the values the university promotes — the rally’s participants “contradicted our values of diversity, inclusion, and mutual respect.”

While not perhaps quite a debate in this instance, this sort of incident makes universities uncomfortable in a way that strikes at the heart of what universities are called to do. And just what that is is contested. If you can excuse the baseball metaphor, some believe that universities should be engaged in teaching students the rules and skills necessary to play the game. For instance, Stanley Fish, the English professor, law school dean, and puckish NYT op-ed contributor wrote a book called Save the World on Your Own Time! Fish argued that universities should stick to teaching poetry, statistics, and developmental psychology and leave the political statements to the politicians.

Others, however, argue that, “educational policy and practice appear to have focused more and more upon developing the ‘worker’ at the expense of developing the ‘citizen’” (Quigley 2010: 1). Returning to baseball, this approach might argue for rewriting rules that unfairly benefit the Yankees or that baseball is not the right game to be playing. Though it takes many forms, this approach calls for a more engaged, even collaborate relationship between universities and publics. The absence of universities in public conversations has been lamented by Russell Jacoby (The Last Intellectuals), Richard Posner (Public Intellectuals: A Study in Decline), and many others.

At the same time, to me and others it seems like a golden age for academic public engagement. The number of blogs, and media interest in academic research, the thirst for partnerships with business and government, and the opportunities for work with a variety of local communities appear boundless.

Denison is not immune to these debates, but has largely skirted any direct confrontation between inchoate sides. We don’t have any sense for what Denison faculty do in terms of what might be called public engagement nor how they think about its proper constitution. We certainly don’t yet have any developed sense for the all important question of whether public engagement counts, which I’ll save for another post.

I and a few colleagues at Furman University thought that we should talk about these matters in a more systematic way, which the AALAC gave us a grant to organize.[1] I offered/demanded that we do a survey about this to get a sense for ‘what’ and ‘how much’ and ‘what for’ we were talking about. That survey, naturally, enveloped Denison faculty as well as the faculties generous of their time at 6 other liberal arts colleges very much like Denison. One of the them was Furman; the rest I’ll spare from public knowledge. It’s hard to know if the results are representative of faculty since we have no sense for how much public engagement we do on average, so let’s consider this a tentative snapshot.[2] I’ll run through a few results – how much Denison faculty engage and what they think about public engagement more generally.

Figure 1 shows the scope of Denison faculty’s engagement with the public compared to the other schools in the sample on the 13 modes of activity we asked about. We, the survey writers, place no normative significance on one or another mode of engagement by listing them; we simply attempted to cast a wide net to better understand the full scope of public engagement among liberal arts faculty.

The bars represent Denison’s proportion involved in each activity, the diamonds are the full sample proportion, and the gray dots represent the other institutions. Denison faculty are on the low side of the average, though our figures are not significantly different from the sample mean (with the statistically marginal cases of advising government and giving public lectures – both p=.17). Altogether, Denison faculty in the sample engaged in 3.17 activities while the other faculty engaged in an average of 3.35 activities, an insignificant difference (p=.60).

Speaking was the primary mode of engagement with the public by Denison faculty. A majority of the sample gave “Lectures, talks, dialogues, and debates with and for public audiences” in the past year, followed by a third to forty percent who consulted, tutored, and gave interviews. By the time we reach a written activity, under a quarter of the sample participated. Denison distributions looks much like other campuses, especially on the low and high ends.[3] The rank of the other items varies by campus, especially because they differ by such small percentages.

One possible reason why Denison’s numbers appear on the low end is the composition of our sample. Faculty in the Sciences engage in slightly fewer public engagement activities than faculty in other disciplines in the total sample, but are actually higher performers on Denison’s campus. Our social scientists underperform the total sample (though both figures in the sciences and social sciences are insignificantly different). The one significantly lower value comes from the Arts, though the sample size (7) is quite small and may be unrepresentative. 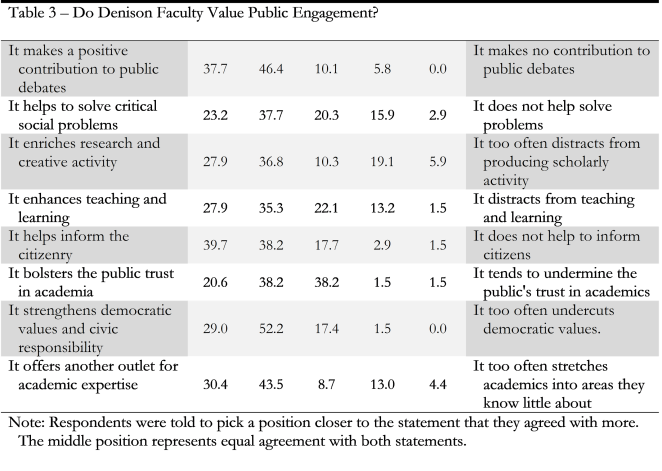 We also posed several questions to address Stanley Fish’s arguments directly. As noted, he (in)famously wrote that faculty should “save the world on (their) own time.” Shown in Figure 4, it is not surprising that Denison faculty prefer to preserve their freedom – the plurality neither agree nor disagree that faculty should advocate for policy prescriptions, but disagree in large numbers that faculty should not advocate. That is, faculty should do what they want, but when they do it they need to justify their claims – 80 percent agree that every claim should be documented (we did not elaborate on standards for evidence, of course). It is interesting, then, to see whether faculty believe there should be a tight connection to research – our faculty are all over the map about whether public engagement should “strictly present the results of research.” It is not surprising to see divisional divides here, with faculty in the humanities and arts more likely to reject this standard than those in the sciences and social sciences (it’s statistically significant, but only differs by .25-.4 points out of a 4 point range – about 10%).

There are no conclusions from this aside from that we should continue talking. We seem to agree that publicly engagement is a good thing and many of us do many of these things already in quantity. Maybe the next question is whether we should do these things. And are we on the same page as our president who calls for the university to:

And, of course, how does these activities fit in the three-legged stool of research, teaching, and service? I have some thoughts about this question, but more importantly I have data from our faculty, which I’ll share in another post in the near future. Let’s keep talking.

Paul Djupe is a local cyclist who happens to have taught political science at Denison since the Harry Potter series was published. You can learn more about his work at pauldjupe.com.

1. My collaborators were Liz Smith in Furman’s Political Science Department and Sean P. O’Rourke who is now running a center at Sewanee but who was in Communication Studies at Furman at the time. We partnered with an outstanding student, Luke Christie, now graduated, to write an article using these data that is set to appear in the Journal for Higher Education Outreach and Engagement this fall.

2. Here’s a sense for the composition of the Denison sample.

3. These were not the full wordings of the questions so please see the full survey here: https://paul-djupe.squarespace.com/s/Public_Engagement.docx