In June of 2017, The Democracy Fund Voter Study Group released a report showing that Clinton and Trump voters were more polarized on social issues than on issues concerning the economy (Drutman 2017). Clinton supporters were decisively left leaning on both economic and social issues, while Trump’s supporters leaned right primarily on social issues yet found themselves more economically centered. As you can see in the graph below, the two groups weren’t too far apart from each other on economic issues, yet it’s hard to image a wider gap on the social spectrum. 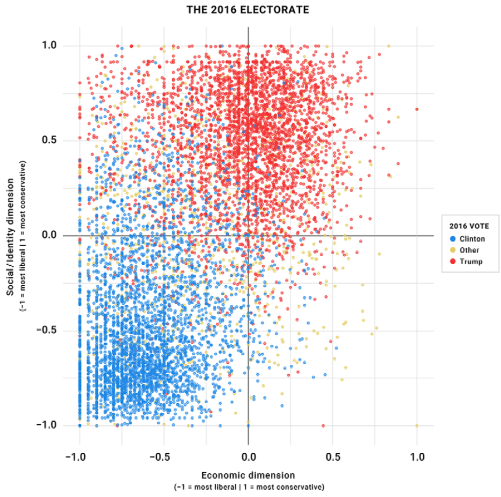 Would this look any different if it showed only Denison students? Although the vote was a lot less split on our campus – with 76.6% of students voting for Clinton and 11.5% for Trump – we can still explore where various students fell on various ideological spectrums. Just before the election in 2016, we surveyed Denison students, measuring not only who they were supporting in the election, but also their positions on an assortment of both economic and social issues. Aggregating answers by issue type, we can create two measures of ideology, just as The Democracy Fund Voter Study Group did in their study (see note 1):

Figure 2 – The 2016 Denison Electorate by Ideologies 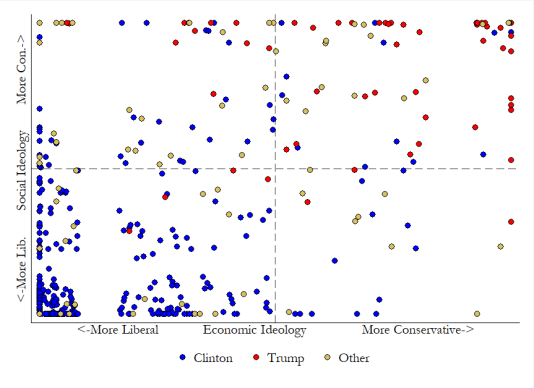 Comparing the results shows some stark differences between Denison students and the national sample (beyond the obvious left-leaning nature of the student body). Trump supporters on campus actually more closely resembled what you might expect from Republican voters: falling to the right on both social and economic issues. The big difference comes on the economic spectrum – Denison’s Trump supporters lean much farther to the right economically than Trump’s overall national supporters. And with an average social ideology of 1.53 (whereas 1 is most liberal, 2 is most conservative), I think it’s safe to say Denison’s Trump’s supporters were far more socially moderate than his national supporters.

On the national level, Clinton supporters were strongly left in both ideological indices, yet as a group were notably more liberal economically than socially; a significant portion were actually right-leaning on social issues. With an average economic ideology of 1.13 and an average social ideology of 1.27, Denison’s campus followed this national pattern of Clinton supporters being solidly liberal in both dimensions, yet more so economically than than they were socially. 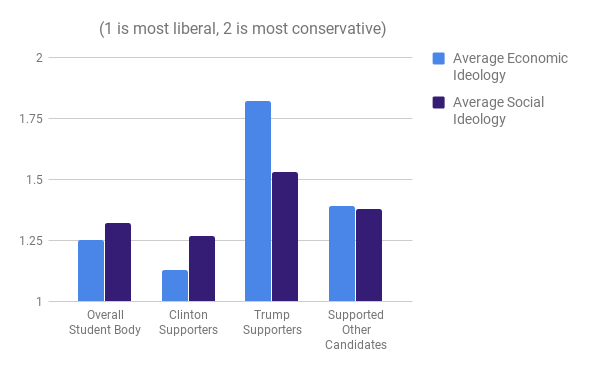 There’s one final and perhaps most notable difference between the national and Denison samples. In 2016, national political polarization was driven mainly by the vastly different social ideologies of Clinton and Trump supporters. On campus, however, the two groups really weren’t that far off from one another one when it came to these social issues – Clinton voters averaged a social ideology of 1.27, while Trump voters averaged 1.53. Although that’s not to say Denison’s campus doesn’t experience polarization: both Clinton and Trump supporters at Denison hold fairly polar views about the economy – Clinton voters averaged 1.13 and Trump voters averaged 1.82, making for a huge gap and some definite polarization. So polarization occurs both nationally and at Denison, yet here, it’s much more about the economy than it is the social issues.

Oliver Gladfelter is a huge advocate of procrastination and spends most of his time finding new ways to waste time. He also studies political science on the side.

1. Although measuring similar sentiments, the economic and social liberal-conservative indices used in the study published by The Democracy Fund Voter Study Group were built using notably different methods than mine. Their economic spectrum combined views on welfare, trade, inequality, and active government; their social spectrum combined views on moral issues and attitudes towards minority groups.