The first time I ever felt ostracized for my race was this year. Unconventionally, it was not due to an ambush of racial slurs, but as a byproduct of diversity, equity, and inclusion (DEI). If you have spent any time applying to jobs or internships this year, you know what I am talking about.

Growing up, race was never something I really gave a second thought to. My whole life I went to diverse schools and was raised in a biracial household. Thus, while it was always something I took pride in, I never perceived it as a defining part of my identity. However, ever since entering the thrilling world of job hunting, I noticed that something related to DEI has surfaced in almost every interview and questionnaire that I have completed so far.

Truth be told, it is really easy to make the joke that I possess the golden ticket of today’s social climate: being able to check off ‘multi-racial’ in job applications that hyper-fixate on DEI. I consider myself extremely lucky to have that on my side, especially considering I have experienced very little marginalization throughout my life as a mixed person. However the more I notice DEI proliferating, the more aware I have become that not all of these corporations are truly committed to their inclusive mission statements.

Diversity, equity, and inclusion are inherently valuable to civil rights, but DEI has also become a billion-dollar industry in which people in positions of power fetishize cosmetic diversity. This is done to curtail any allegations of discrimination, which is fundamentally the opposite of what DEI stands for.

Although Denison has certainly stood on the right side of DEI, with its population improving in diversity by 23.1% over the past fifteen years, 127 found that it may still be lacking in some areas. In our October survey, we are able to evaluate the advice presented to us by our very own President Weinberg to cultivate meaningful relationships. He suggested, “If somebody says something in a class that is shocking to you, invite them to lunch or out for coffee and just sit and listen to them explain their view. Start by asking about their life experience. Often people’s views come from their backgrounds or what we might call their lived experience.”

Fortunately, 127 found that Denisonians did not dismiss his advice. At first glance, it appears that white students are reluctant to befriend others with backgrounds that do not match their own. However, the graph below rejects this assumption because racial minorities account for roughly 40% of Denison’s population and whites have an average of 36% friends of another race. That being said, when asked to consider how many of their five closest friends were of another race, none of the racial demographics identified their friend groups as completely diverse, meaning there is still room for growth. 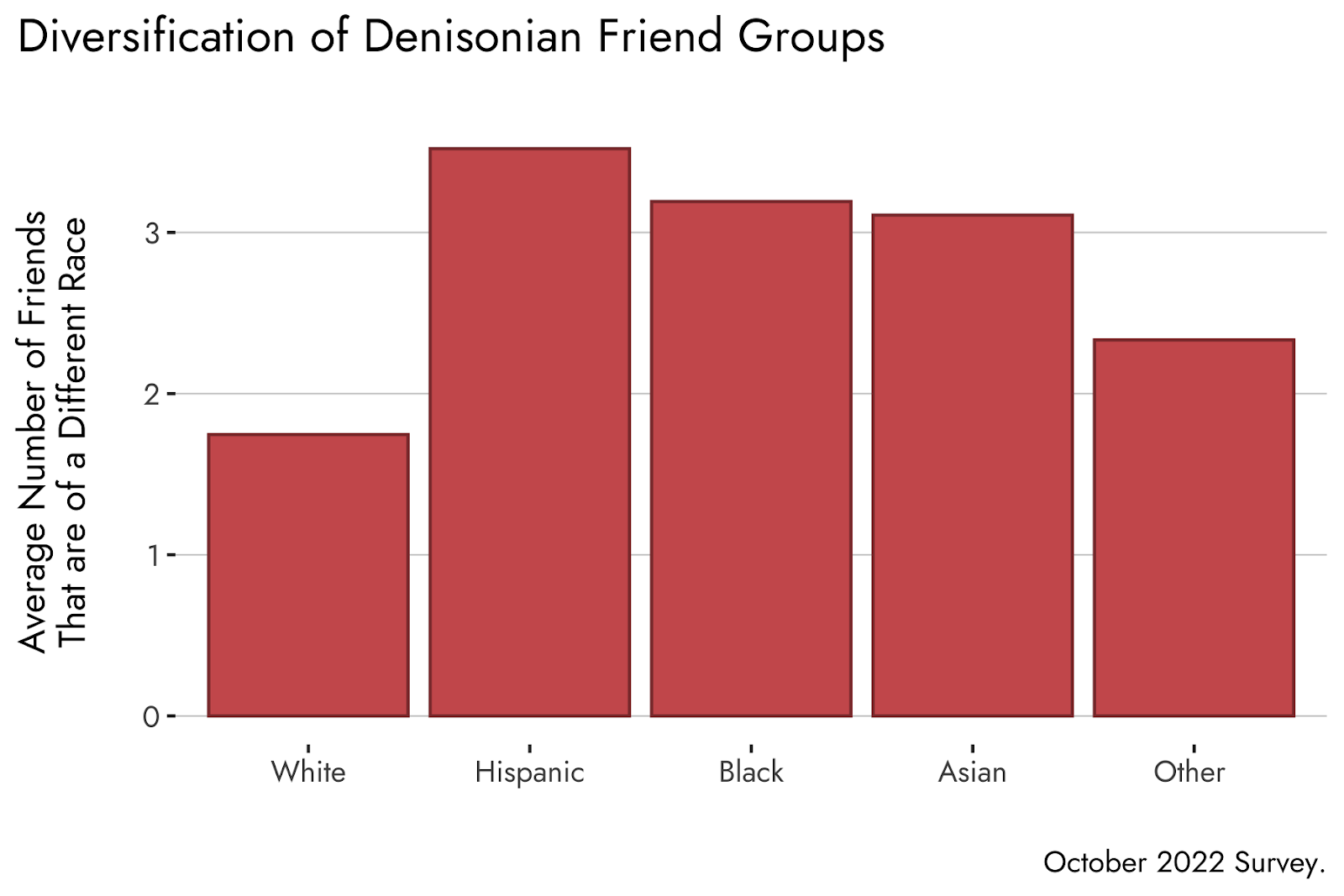 Now, I certainly am not trying to argue that Denisonians have to collect friends from every race category like infinity stones, but the weak presence of diverse friendships within our community should be an area of concern.

A lack of diversity holds a lot of negative implications because it prohibits growth and innovative change. When individuals are not frequently exposed to diversity, they are less inclined to collaborate with others. This exacerbates the effects of cross pressures because people are not accustomed to having the sometimes uncomfortable but imperative conversations that heterogeneous environments typically bring about.

These ramifications are found on our campus, too. The graph below highlights that Denisonians are reluctant to engage in intense conversations. Almost half of our population has curtailed purposeful political dialogue by minimizing the intensity. This societal reaction undermines the willingness to deliberate.

The figure below looks at the link between exposure to racially different friends and the desire to participate in political conversations (‘yes’ and ‘kind of’ are combined). It shows that antipathy (‘no’) toward political discussion falters for whites when their friend group grows more diverse – that’s good. Interestingly, we see the inverse with blacks who show some more hesitation to engage in political discussions when their friend group has an array of different races. That is, exposure to diversity for whites does just what President Weinberg would hope it would, though greater diversity seems to undercut political engagement of Black students, though it does not seem to affect Asians and Latinos whose antipathy to intense political discussion is generally higher.

With the severe degree of polarization in the United States, diversity has become something that is much easier to represent, but is consequently harder to put into action. Therefore, while DEI does not fail entirely at Denison, there is mixed evidence regarding racial mingling and willingness to deliberate among students. This poses a real threat to the bond of Denisonians because when people do not feel free to express themselves politically, they are more likely to be intolerant of others.

Overall, we can see that Denison does not exploit DEI the way that many large corporations and institutions tend to. That being said, considering that the majority of our population remains white, it is imperative to make progressive strides with DEI because as it improves, so will the Denisonian political and intellectual drive.

Alex Lazo is a senior political science major. You can currently find her mooching for an underclassmen’s meal swipe as she has not gone to the grocery store in weeks and refuses to enter IGA during the final days of the semester.