Zach Broeren and Paul A. Djupe

In a recent class of ours, American Political Behavior, we discussed an article regarding what the United States’ politics would like like if only certain groups voted. While interesting, it left out one factor: third parties. Third parties are consistently overlooked in the grand scheme of American politics, for good reason as they are mostly inconsequential in the final results of most elections. However, they do draw some support – in the 2016 presidential election, Gary Johnson of the Libertarian party drew 3.2% of the vote or nearly 4.5 million votes. Just as Libertarians are a small but present group in American politics, are they similarly represented at Denison?

In the March 2022 survey, we asked about students’ ideological identification, so we can see how extensive identification as a libertarian is on campus. There are not many – 7 percent of this sample – and they come in just shy of the rate of “conservative.” The majority of the sample identifies with some left-leaning identity like “progressive” or “liberal.” 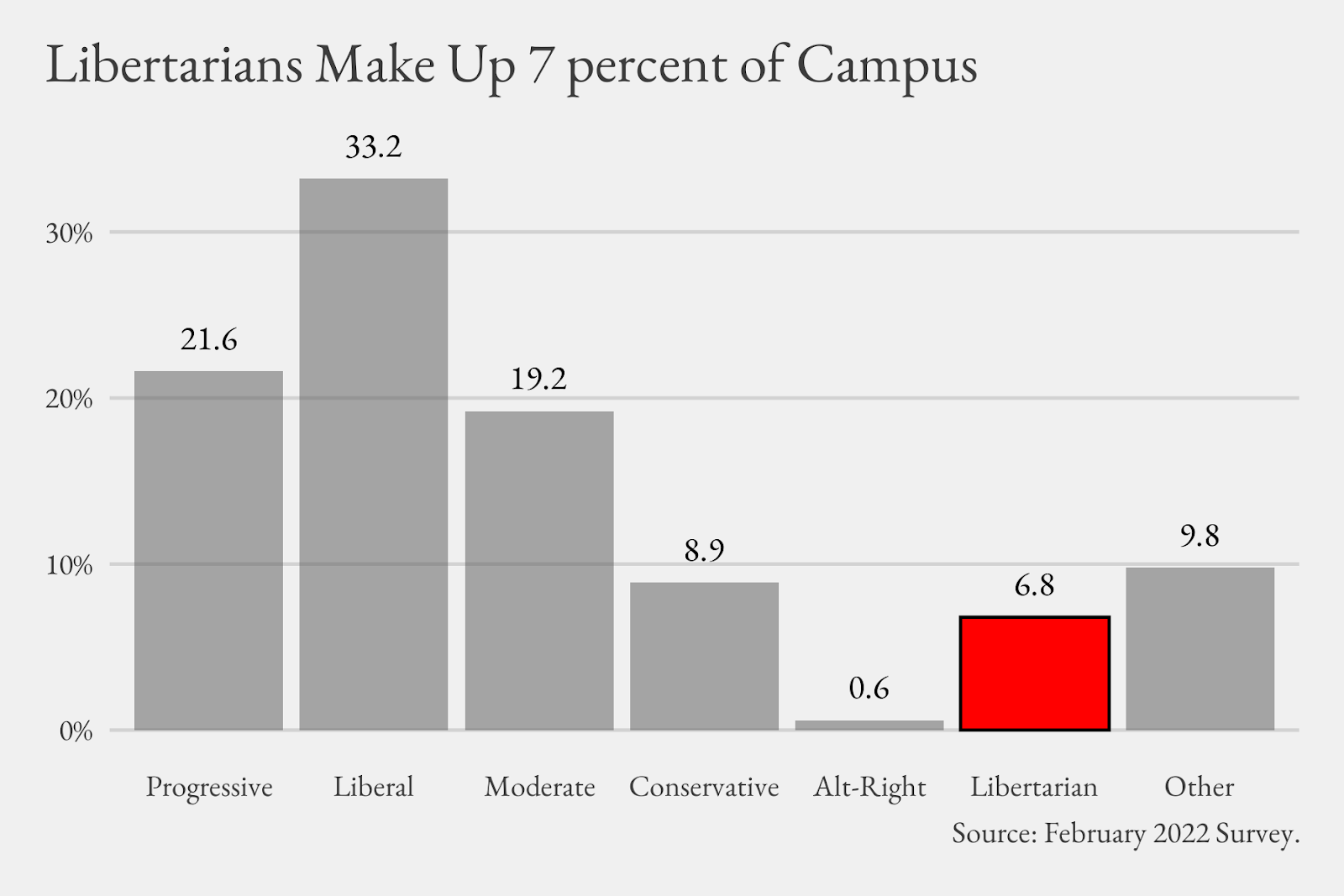 The way we asked about it, libertarianism is an ideological identity, not a party affiliation. That means that libertarians could identify as Democrats, Republicans, or independents. It turns out that only a plurality of libertarians (42%) are independents – those not affiliated with one of the two parties. And equal amounts of other libertarians are Democrats (29%) and Republicans (29%). That also translates into different balances of men and women – from the left to right, men are an increasing percentage, so men make up 75% of Republican libertarians and only 48 percent of Democratic libertarians. Put together, libertarians are majority male, though not by a huge margin (55% men to 45% women). 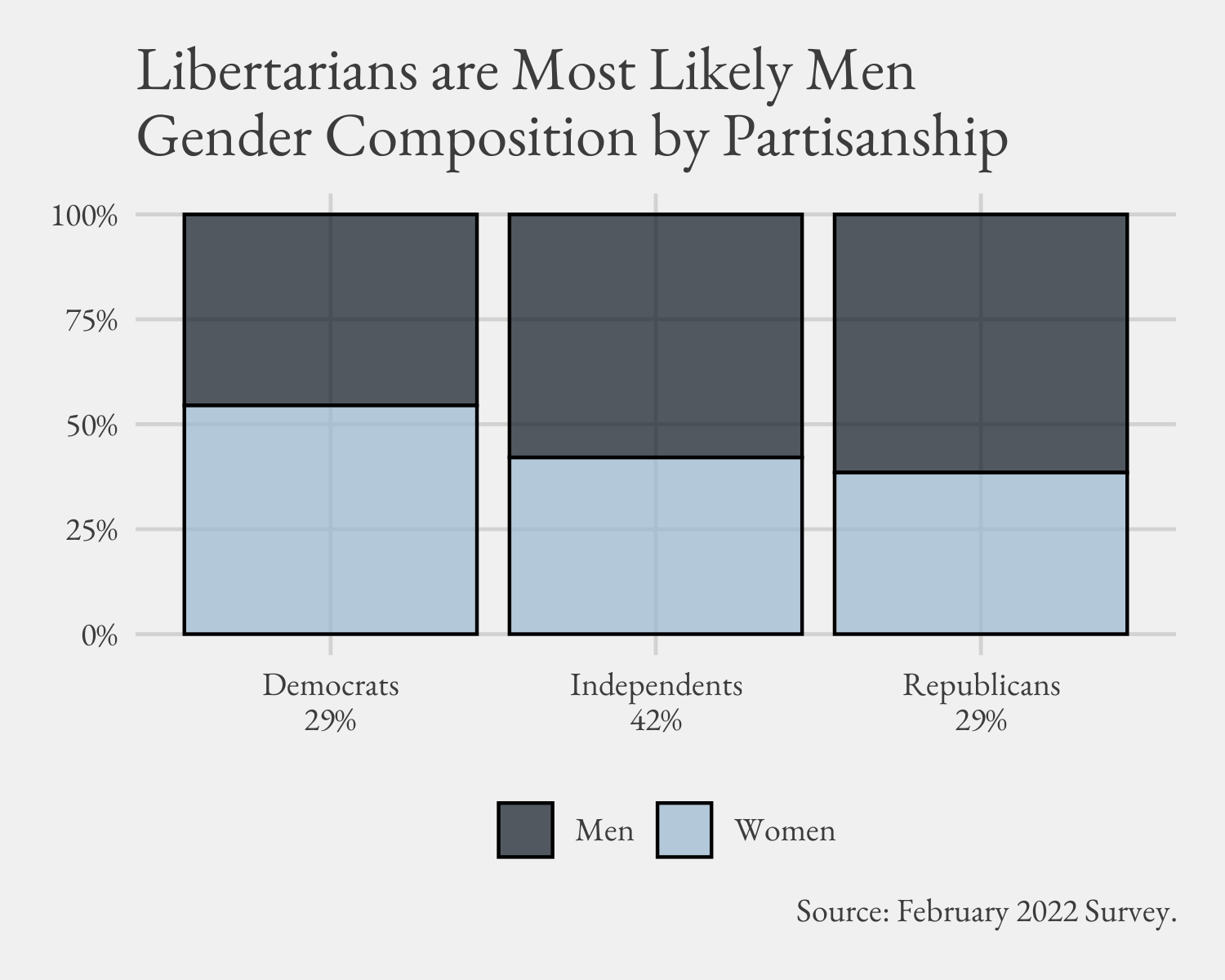 We wanted to get a sense of what libertarians stand for and there are lots of ways to do it. In this instance, we used questions that tell us about their support for pushing for equality and a belief in hierarchies. Those who support hierarchy would agree with this statement, “It’s probably a good thing that certain groups are at the top and other groups are at the bottom.” And those who support a push for equality would agree with this statement, “We should do what we can to equalize conditions for everyone.” Opinions on the two are negatively correlated, as expected – the more you support equality, the less you think hierarchy is an acceptable social condition. Fully 70 percent of campus favors equality and disapproves of hierarchy, while a bare majority (50% on the nose) of libertarians feel likewise. Among the rest of libertarians, 24% favor neither hierarchy nor a drive for equality, 17% favor both, and 10% favor hierarchy and no push for equality. That’s all over the map.

We *think* that the orthodox libertarian position would favor equal conditions that would allow individuals to thrive depending on their drive and talent. That would probably not entail groups rising to the top, but rather individuals. We are curious whether people would make that fine distinction between groups and individuals, but these particular items don’t allow us to tease that out.

Below, we can see that their position on group equality varies considerably by their partisanship. Perhaps naturally, Democratic libertarians are more in favor of equality and not hierarchy, which sees much less support from independents and Republicans. Among those groups, only about a third take the pro-equality, anti-hierarchy position. It’s interesting to see just how diverse the stands are among independent and Republican libertarians – there is no majority position. Instead, the other position that attracts substantial support is more anarchic, that we shouldn’t try to equalize conditions for all AND that hierarchy is not a good thing (the green section).

Libertarians on campus are a diverse lot and don’t fit the stereotype of young men opposed to anything that would upset their favorable status quo. If identification patterns on campus upset that apple cart, it’s also not exactly clear what they are for, at least by our set of measures. There are some who want to level the playing field, while others want no intervention at all. We’re not arguing that this apparent diversity of thought is unique to libertarians – other partisan and ideological labels are likewise big tents. But it also means that when you find out that someone is a libertarian (or a liberal or progressive or whatever!), you should ask some followup questions to understand just what that identity means to them.

Zach Broeren is a Senior applying to graduate school in hopes of experiencing imposter syndrome. He rarely posts on twitter, @BroerenZ, but might be worthwhile to check it out.

Paul A. Djupe is a local cyclist who runs the Data for Political Research minor. He started onetwentyseven.blog a few years ago in a bid to subsidize collective action. He’s on Twitter and you should be too, along with your president (and Zach).