One of the realities of being at a small school (and something Denison boasts about) is that you really get to know the people around you – there are plenty of opportunities to form meaningful and personal relationships on the Hill. Have you ever noticed how many Densonians meet their significant other on the Hill? Many Denison alumni credit our university as the place they met their now husband or wife. Based on that reality, one would think that our university’s dating scene is quite healthy – there’s just something romantic about Central Ohio… However, based on the most recent 127 survey data, our student body thinks otherwise. 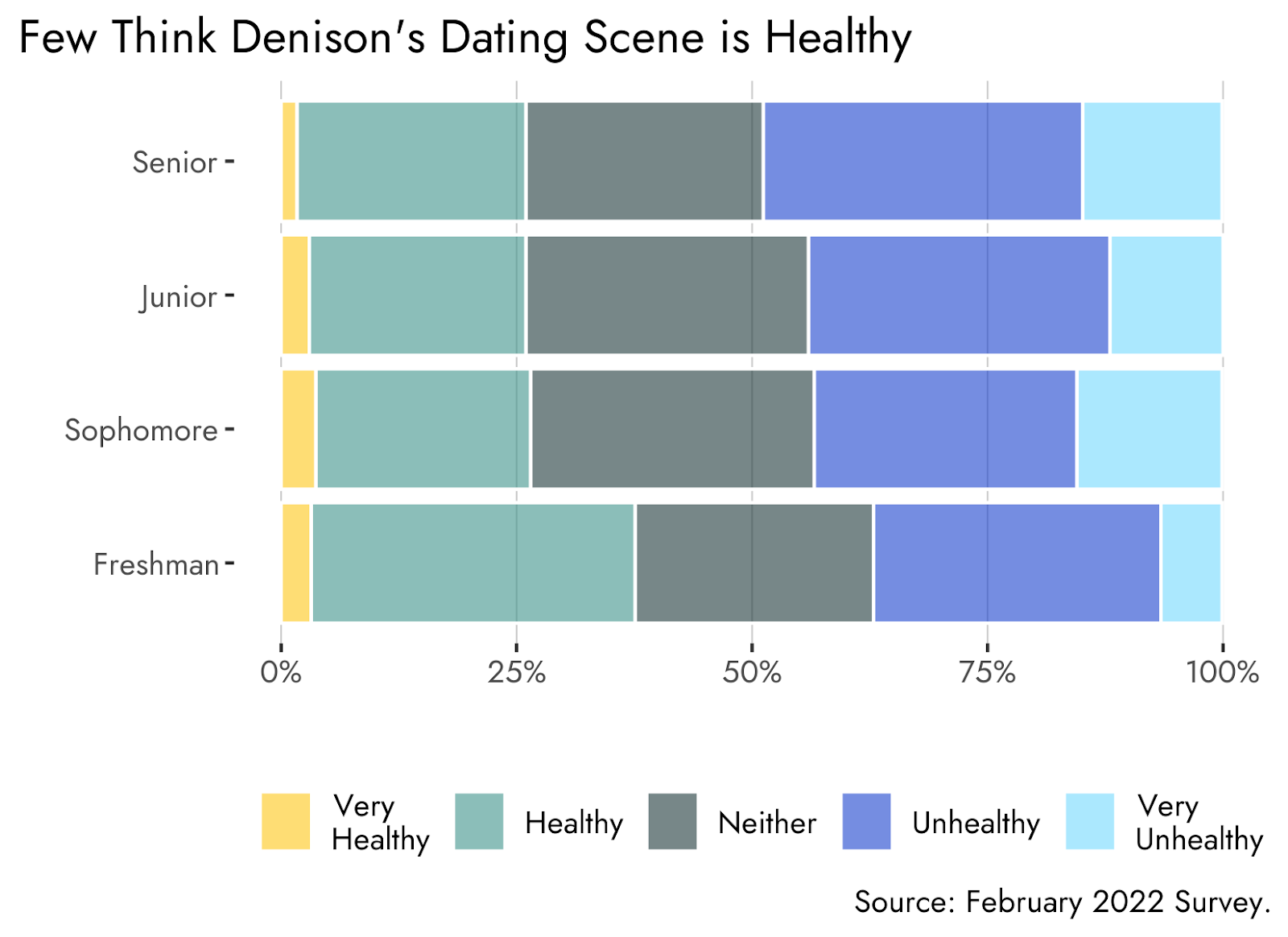 Across all class years, there is a general consensus that the Denison dating scene is unhealthy. In each year, about three-quarters of students think the Denison dating scene is very unhealthy, unhealthy, or neither. Freshmen have the highest percentage of students (~40%) who think the dating scene is healthy, perhaps because they have spent the least time on the Hill and have had less opportunity to experience a negative romantic relationship. Conversely, the data regarding seniors’ feelings towards the dating scene shows the highest percentage of feelings that the dating scene is unhealthy. Around ~50% of senior Denisonians believed that the dating at Denison was either unhealthy or very unhealthy. The identifiable trend reveals that as students spend more time at Denison and presumably enter into relationships, they have more opportunities to have a negative experience. Even though there’s a feeling that the relationship scene might be unhealthy, there is a brightside. Even if an individual has a negative experience with dating at Denison, at least now you have a better idea of what your standards are when it comes to looking for a significant other.

There is a pretty extensive vocabulary in our culture regarding how people classify their relationships and that’s true of the Denison lexicon. For this survey we broke down types of relationships into four categories (the parentheticals were listed in the survey: Committed (exclusive, “dating”), Casual (open, not committed, more than nothing), Situationships (if we happen to be in the same place, then sure), and Hookups (entirely of the moment). Seniors have the highest number of relationships of all sorts, averaging just over 6 of all types (the maximum respondents could list was 5 in each category). Freshmen and sophomores are not all that far behind, averaging just over 4 of all types. That pattern suggests that during your first two years at Denison, people are engaging in all sorts of relationships and just trying to figure out what their standards are when it comes to dating. The only real difference between the Junior and Senior data results is that the Juniors are in less committed relationships. This could be due to the fact that a large majority of Juniors go abroad, and have less time at Denison to meet someone that could turn into a committed relationship.

To me, the data suggest that there just isn’t that much relationshipping at Denison. It’s not just that there aren’t many committed relationships (everyone averages about 1!), there aren’t many casual ones either. 127 doesn’t have comparative data to let us know if this is a little or a lot, if the trend is up or down, but this sure seems low to me. It’s easy to blame the pandemic, which had to have disrupted the socializing that leads to relationships.

Speaking of socializing, there are many places to meet people at Denison, but the party scene amps up the volume of people you encounter. Is there a link of relationshipping to partying? The graph below shows how the average number of relationship types shifts based on the number of days binge drinking. The most apparent trend in this data is the rise in relationships among those survey participants who drink more often. But the types increase at different rates. The number of committed relationships doubles across the entire range, whereas the number of hookups triples (the other two categories are in between double and triple the size of the non-drinkers). Well, that’s not a surprise.

There are a couple reasons this trend could exist. For one, the students that report they binge drink likely do this in social settings. These students are out at the moonies, senior apartments, and bars during any given week, where they meet people at a higher volume. The more people you meet, the higher chance you meet someone that leads to relationships of some kind. Another possible reason would be how alcohol got the monicker “liquid courage”. Alcohol is consumed for a variety of reasons, but in general it is known to make you more confident, for better or for worse. Further, those students who consume more alcohol might have a higher reported number of relationships because they might be more willing to interact with a potential partner – they’re more extraverted. Now I am not suggesting that if you are struggling romantically to head over to the closest liquor store and buy yourself some courage, but it is apparent that those who drink are involved in more relationships.

Lest you think the drink is the thing, it will surprise no one that those involved in more campus organizations also have more relationships. As shown below, the rate of everything doubles going from 0 involvements (which is almost no one) to 5+ groups. 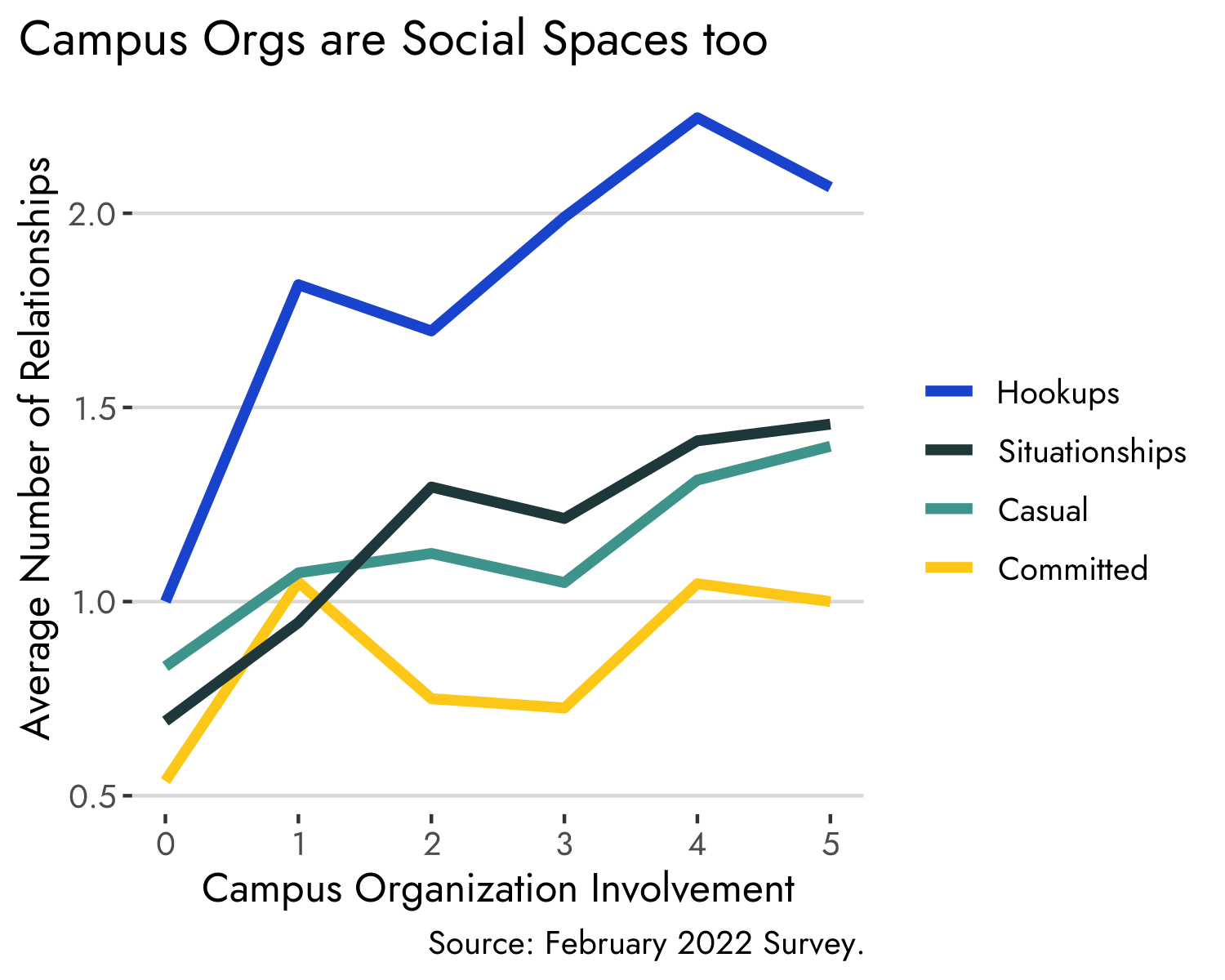 In conclusion, like any other college experience, at Denison the students are part of all sorts of different romantic relationships during their tenure at college. At the same time, our survey participants feel that the dating scene at Denison is not healthy. One way to spin this is that it means when you leave Denison you’ll have a better idea of what you’re looking for. Another could mean that students haven’t had enough experience to know. Still, there’s an obvious correlation between the amount of socializing students do – whether in parties or campus orgs – and how many romantic relationships they have been in. Could the link to partying be one factor in the feelings around campus that the dating scene is unhealthy? Yet, since many alumni found their current partner during their time at Denison, the “healthy” vs. “unhealthy” dating scene could just be generational.

Gus Hoffmann is a senior at Denison University who will be graduating this May. Following graduation he will be moving to Boston and will no longer be providing people with amazing Denison-related content.