If you walked around campus last spring, you would have been greeted by red and white posters everywhere. They had slogans like “Hello my name is student worker” or “did you know since 2018 student wages have remained at $9.25, but tuition has increased by 16.6%” and a little circle logo in the bottom corner that said dLOC (denison Labor Organizing Committee ). This student-led labor movement never led to organized unionization but was able to get big wins for student workers, including a higher wage and the hiring of a new student employment coordinator.

The rise of undergraduate student unions or undergraduate student workers demanding rights and protections has been a nationwide shift. As just a few examples, Kenyon college students have been battling their administration for recognition of their student union (K-SWOK/UE), Hamilton admission workers successfully unionized last semester by joining UFCW (United Food and Commercial Workers International), and Grinnell had the first undergraduate union – the UGSDW (United Grinnell Student Dining Workers).

The recent surge in student labor organizing can be attributed to both cultural and systemic changes. During the pandemic we saw a dramatic increase of workers involved in strikes (27,000 in 2020 and 80,700 in 2021) and union approval ratings are at their highest level in almost 60 years (68% approval in August 2021). Simultaneously, the National Labor Relations Board in March 2021 withdrew a proposed rule that would have “exempted from the NLRB’s jurisdiction those students who perform services for financial compensation in connection with their studies by declaring them not to be “employees” within the meaning of Section 2(3) of the National Labor Relations Act.” By withdrawing this proposed change, the NLRB signaled a position that was very pro-student workers, opening the door to the rise in student worker organization we have seen.

It is clear that the spring of 2021 marked a turning point for student labor rights both nationally and on our campus. But did this turning point change Denison students’ opinions on student labor rights and how do students think about unionization? We can offer answers to these questions because in the October 2020 and February 2022 surveys the onetwentyseven team asked Denison students, “Do you agree or disagree that forming a union of Denison student workers would be a good idea?” Our results show that student opinion on unions did change with more students in 2022 over 2020. In October 2020 about 15% of students strongly agreed that forming a union would be a good idea and 4.3% strongly disagreed. By February 2022, the percentage of students who disagreed fell to 2% and those that strongly agreed rose to 19%. Additionally, ambivalence on this issue (the middle score) also decreased by 7 points.

The national and local conversations about student unionization changed dramatically between these two time periods and so did the landscape of on-campus work. The percentage of students who reported not working fell by more than 10% and those working the upper limit on our survey (10+ hours) increased by about the same amount. Students are working significantly more hours now than before the COVID-19 pandemic. This could be due in part to the instability of the economy, rising tuition costs, and/or changes in family economic status because of pandemic job instability.

Despite the dramatic change in the landscape of work on campus, we found that the number of hours someone worked did not affect their union opinion in the February 2022 survey. There was a slight correlation between working more hours and being pro-union but not one that was statistically significant. This indicates that the issue of unionization was raised to a full campus conversation, not just a conversation happening within the community of student workers.

A factor that did have a substantial impact on union opinion was partisanship. There is a strong correlation between Republicanism and anti-union sentiment. This is not surprising as anti-union laws are typically found in conservative states, Republican politicians typically advocate against policies like a rise in minimum wage laws, and national unions tend to endorse Democratic candidates. 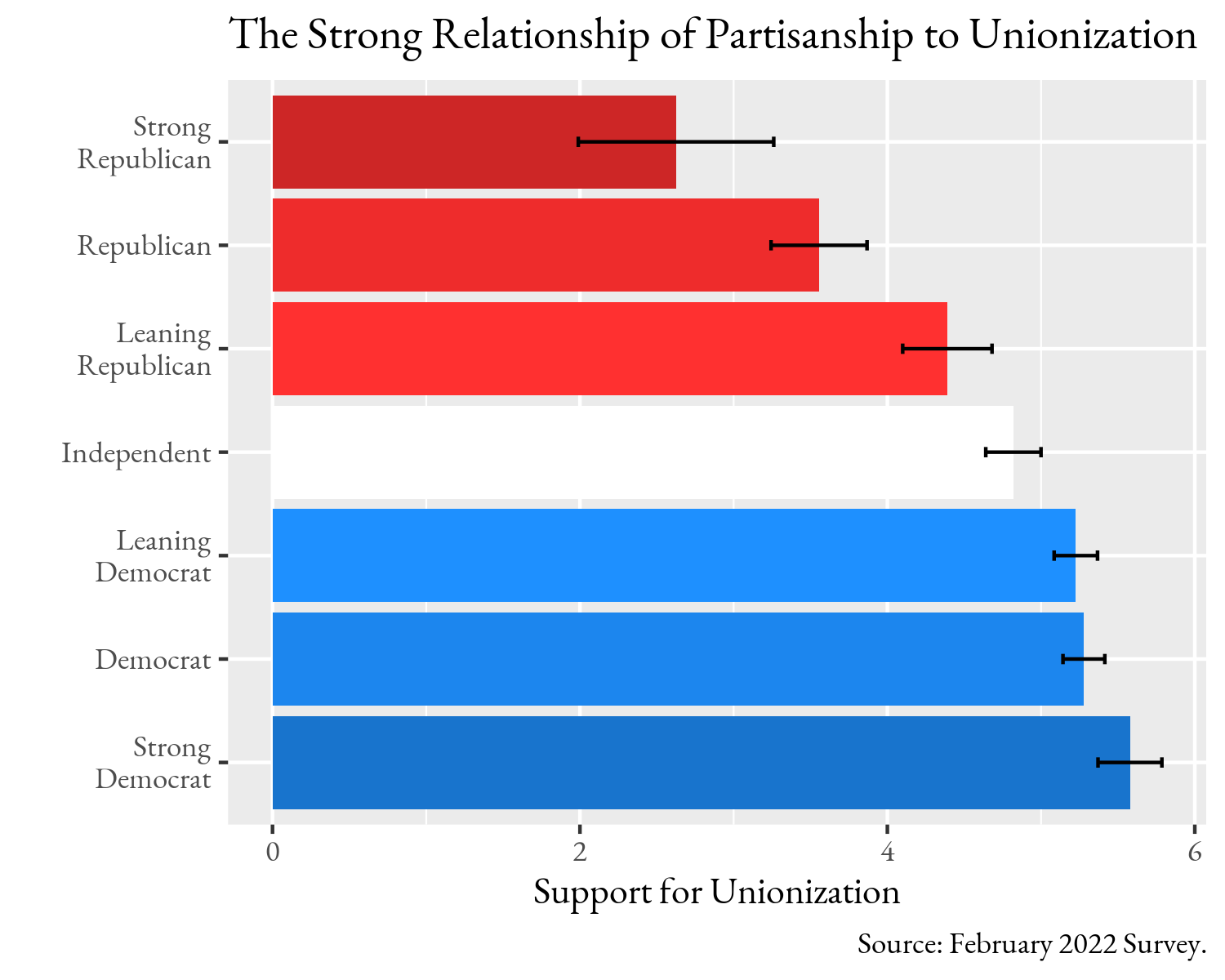 Does this mean Denison workers should unionize tomorrow? I am not sure. But to every student leader, this means that even in the face of exhaustion, pushback, and a lack of acknowledgment, you should know that the work you are doing matters and has the potential to change campus opinion. Keep going.

Madeleine Murphy is Junior Philosophy, Politics, and Economics major with a Data for Political Research minor (say that 5 times fast). When not writing for onetwentyseven, she is dealing with the bureaucracy of student government as speaker or pulling out all the cheesy jokes as a tour guide. Find her on LinkedIn.