If the “arc of the moral universe is long, but it bends toward justice,”[1] holy cow is that arc wiggly these days. Because when I think of the main engine of justice, I think of the federal government of the United States. There is arguably no institution in the world that has the power and resources to make change happen and improve the lives of more people. Helping to feed the world, advance the cause of democracy, to prevent the spread of communism and dictatorship, and advancing technology that makes the air cleaner, productivity easier, knowledge gain quicker, diseases contained and treatable are all projects in which the federal government had a hand in. It can also do just the opposite of that list and there are many indelible stains on US history.

One of the key components that government of, by, and for the people draws upon for public projects is their trust. Short of drawn weapons, most collective action problems are resolvable when people trust one another. They can cooperate to build bridges, protect information, restrain themselves from overgrazing, and create national parks. Trust is truly a precious resource and has been in short supply in recent years. In fact, it has been in a long, unsteady decline since 1958 when pollsters started asking these things, so that now only 18 percent of Americans trust the federal government to do what’s right most or all the time.

That lead me to wonder where Denison students are and whether their trust levels have changed in the Trump era. Fortunately, we asked the same trust question in April 2016, which is before Trump took office, and then again this fall in October, 2018.

The figure below shows that trust in government at the end of the Obama administration has melted some in the last 2.5 years. Denison students were at the same trust level (~20 percent mostly or always trusting) as the population in 2016. I’m not surprised – I keep arguing that the student population is not that different from the rest of the adult population (see also the recent post on views toward socialism). But that level eroded, so that only 12% trust the federal government at high levels in October, 2018. The lower end of the scale destabilized as well – ‘never’ and ‘sometimes’ almost doubled.

There are some events that move the entire population – September 11, 2001 was one such event that encouraged greater cooperation and trust. Otherwise, the change of administrations serves to the flip the polarity of trust judgments. That is, at the stroke of an election, losing partisans stop trusting the government to do what’s right. Did that happen at Denison?

The figure below suggests that it did happen, which helps to explain why overall trust eroded. There just aren’t that many Republicans (19% of the sample) and they tend not to be strong backers of Trump in any event. The figure shows that those who trusted the federal government in 2016 were more Democratic, while those who trusted in 2018 were more Republican. There was a lone strong Republican who ‘always’ trusted the federal government in 2018.

In the general population, government and social trust are not typically related. Social relations are more stable than party control of government and people tend to be insulated within friendship networks – that is, there’s not very often a change in ‘social administrations’ that would undercut trust. That’s why it’s particularly interesting to see that social trust, both generally (“How often can you trust other people?”) and at Denison (“How often can you trust other Denison students?”), are linked to government trust. The figure below shows that trust in government in 2018 climbs as trust in other people climbs (no, this is not just a function of being in a Greek organization where there are more conservatives). It works for both trust in students and other people, but more strongly with other people. 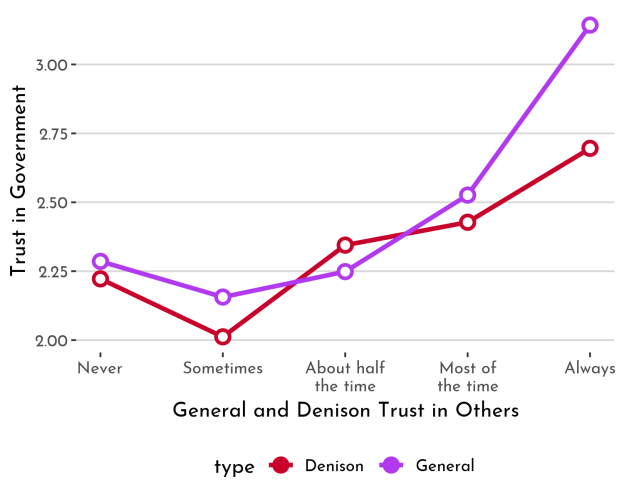 Just to highlight how funky this is, I’ve plotted how partisanship is linked to social trust. Note how Republicans trust people less than Democrats do, but they sure do trust the government more these days. What this means is that there are some folks out there who buck these trends and trust both other people and the government. Who are these “trusters”?

It turns out that those who participate in politics at high rates are less likely to be trusters – the uninvolved are 20 percent more likely to be trusters than those involved in everything. And those with high GPAs are much more likely to be trusters – by about 25 percent (from D avg to A avg). I understand why political participation could lead to some circumspection about the other side’s control of government. So what is going on with high GPAs? I suspect that those who are achieving at Denison are invested in the system and believe that people and institutions are trying to help them succeed – their views toward government are a byproduct of that feeling.

These results highlight to me how important it is to plug in and find a way to contribute. Others appreciate it, institutions often want to support you for it, and that symbiosis is contagious to everyone’s advantage. Or, let me put it differently, one way we can rebuild (inter)national purpose is to just start doing it and let the relationships you build radiate outward.

Paul A. Djupe is a local cyclist and Denison political scientist. You can learn more about his work at pauldjupe.com. He climbed 196,000 ft in 2018 on 121 rides and aspires to exceed those marks in 2019.

1. The quote in this specific form is Martin Luther King Jr.’s, though the original idea about the abolitionist cause was much more verbose in Unitarian minister Theodore Parker’s composition, “I do not pretend to understand the moral universe; the arc is a long one, my eye reaches but little ways; I cannot calculate the curve and complete the figure by the experience of sight; I can divine it by conscience. And from what I see I am sure it bends towards justice.”