The polls just closed in Ohio and everyone is excited to know what we think the vote looked like among Denison students. We are just wrapping up our poll of students this semester (~530 responded) and are taking a quick look on election eve.

Overall, student voter interest was down from 2016, in which 61 percent were very or extremely interested compared to 37% in 2018. However, Denison students were well poised to engage this election cycle as most claimed being registered to vote. What’s remarkable is the number who report their registration in Granville – just over a third registered to vote here (this looks a lot like the 2016 pattern). Since few students are from Granville, this is almost all mobilized by social circles and political organizations (more on that in a future post). While very few citizens are not registered, the remainder (49%) are registered to vote off campus somewhere.

As is common before elections, we tried to figure out whether students were going to vote, already had, or had little to no intention. We borrowed language from a Harvard Study of college student political activism, asking “So far as you know, do you expect to vote in the national elections coming in about a week on November 6th?” The responses, seen in the graph below, show that most all had the intention to vote or claim to have already done so. Out of those registered, only 12% said they were not voting this round. 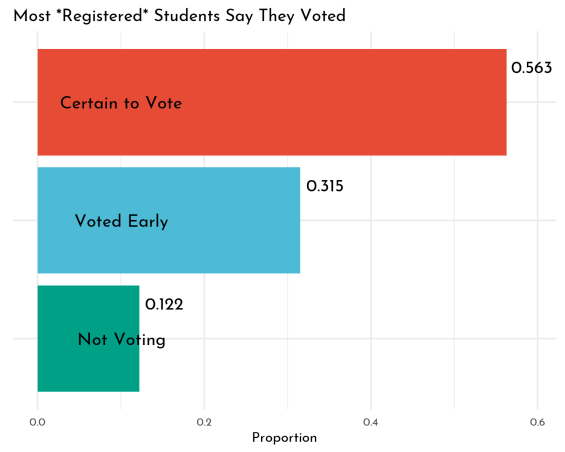 Leaving out the ineligible voters (non-citizens) gives Denison an estimated 81 percent turnout rate. It was a bit higher in 2016 (93%!), but not by too much. It’s very hard to improve on such a turnout rate and this is simply outstanding for a midterm election.

Speaking of the power of mobilization, the figure below shows the estimated turnout rate for people with different registration statuses. While non-citizens and the unregistered are just noise in the survey, the other categories show the power of social ties. That is, those registered in Granville and Ohio more generally have the highest self-reported turnout rates. Once the social tether is cut (registered at home), then turnout tends to fall off a bit. This pattern reflects truisms in political science that low institutional barriers plus a supportive social environment make for the best voter participation.

You might be thinking that people lie about socially desirable things (like voting) and that the survey could be biased to those involved anyway. Both are likely true and I have two answers. First, we’re going to get the Granville vote data (hear that Rains?) to confirm whether those who said they are registered in Granville in fact are and also whether they voted in this election. Second, I used a fairly complex weighting program to make the sample look like the Denison student body – a representative percent white/non-white, the correct class and greek proportions, the correct balance of men and women. Once we take that into account, estimated turnout dropped from 82 to 81 percent. Obviously it didn’t make much difference at all.

All told, Denison students continue to way out perform the stereotypes that students are usually saddled with: That they are uninformed, do not participate, and vote out of state. Our students take citizenship seriously for lots of reasons that will be fun to explore in future posts.

Thanks to all those students who responded to this survey!