By The Darian of Harrington

Another semester has rushed by and numerous new features have been implemented on our home on the hill for the 2017-2018 academic year: the amazing and totally useful wall in front of Slayter, half of South Quad being shut down due to construction, and most importantly (in my opinion) the new parking system. For those of you who do not know, the previous system was governed by seniority, giving priority parking to upperclassmen. Freshmen could only park in inconvenient and isolated ‘green’ parking areas, sophomores got a few more options and better spots, and upperclassmen – with their elusive, blue passes – could park in any student parking areas they desired. Starting in the Fall 2017 semester, the parking system was changed so that students parked based on where they lived instead of graduating year – removing all seniority from the system. I was curious as to the overall opinion of this new system, as well as if underclassmen were more supportive of the change.

In a survey conducted by Dr. Djupe’s senior seminar in October 2017, OneTwentySeven asked over 700 students if they approve or disapprove of the new system. Overall, 46 percent agree with the new policy, a third are indifferent, and just 22 percent disagree with it. The figure below shows that nearly a majority of those without a car don’t much care, but among those with a car on campus a slim majority actually agreed with the new geographic plan.[1] Perhaps it’s not surprising that a policy that levels the playing field would find some support on campus. Since only 40 percent of campus has a car, this is a fight among a minority of those with a stake. 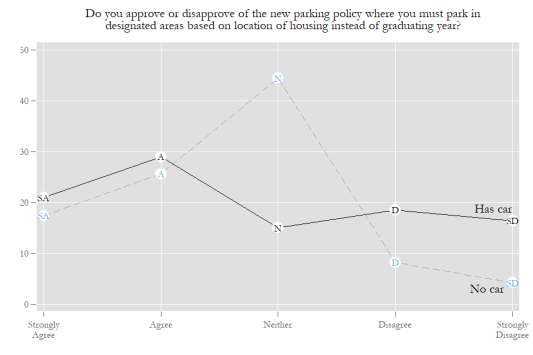 We clearly expect that opinion will vary by class year – with juniors and seniors more opposed since their ox was gored, and first-years being much more in favor of the new system. But, again, we expect that salience plays a role here — first-years with a car should be super pumped, while seniors with a car should be seriously opposed. And that’s just what the figure below tells us. More juniors and seniors without a car take a principled opposition stand against the policy, but not at the same level as their classmates with wheels. Not many first years and sophomores find a reason to oppose the policy, but support is strongest among those with a ride. 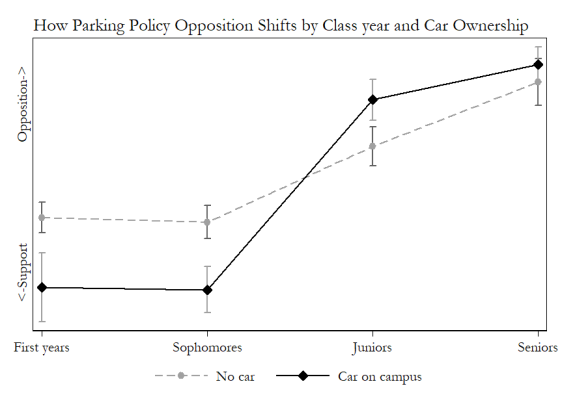 So now what? The data show that seniors and juniors like the old parking system over the new but the opinion is switched when it comes to sophomores and first-years. Should the old system be reinstated because the groups with more vehicles on average disapprove more? Should the new system be kept because the people who disapprove are going to be out the door via graduation soon? In my opinion, the new policy works for some parts of campus and not others. I lived on east quad for the Fall 2017 semester and it was awful in terms of parking. I am living on north quad for the Spring 2018 semester and it is not nearly as bad.

Although the new parking system was initiated through DCGA, former campus safety Chief Hect was a strong proponent of the change, even coming to DCGA months before the vote to ask “why not just park where you live?” Interestingly enough, Chief Hect stepped down as campus safety director last month, and it seems his ‘park where you live’ mentality has left with him. A new interim director has arrived and brings a fresh idea: park wherever you want. Instead of upperclassmen and underclassmen lots, or West Quad and East Quad lots, all student lots will be simply that – student parking, which would be open to everyone, regardless of quad of residence, class year, hair color, etc. Meaning the parking system may change yet again. So far, DCGA seems receptive to the suggestion, but how does the general student body feel? Stay tuned, we’ll be asking you about this soon.

Darian Harrington is an amateur misanthrope who is simultaneously trying to save the world with his Political Science education. When he isn’t hermiting in his room, you can find him procrastinating in Knapp.

1. Overall, by our estimates, 40% of students have a car on campus. The figure below shows the spread of having a car on campus by year. It obviously increases monotonically from first year (17%) to senior year (64%). 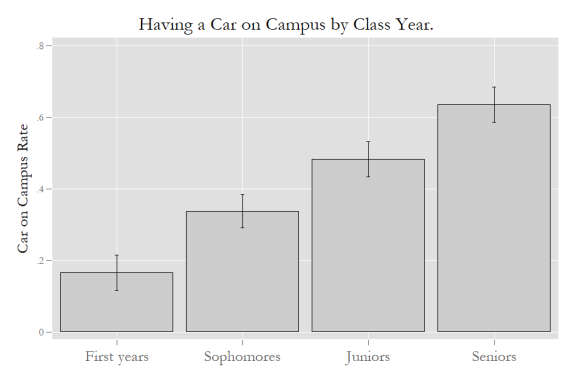