Time to talk about the Sunnies. We all know that the Sunnies function in two main ways: apartments for seniors and spaces for parties. For the most part, parties are hosted in the Sunnies because they are one of the few spaces on campus big enough for larger groups of students to gather. Rumors fly around campus about the parties that occur in these mysterious apartments, rumors that include everything from the good, the bad, and the flat out ugly. While people often joke about what happens in the Sunnies, the party culture in these spaces has surfaced in more serious conversations on campus about inclusion, comfort, and respect. Sunnies parties still seem to be a major aspect of the campus culture – are they? Who is this paragon of partying working for? Are certain types of students more comfortable at the Sunnies? If so, why?

We recently gave a survey in March that asked nearly 580 Denison students how often they drink a week, how many times they have been to parties in the Sunnies, and whether or not they feel comfortable at the Sunnies parties. About 75% of students said that they attended a party in the Sunnies multiple times, while just over 12% reported going only once before. Additionally, about 12% had never been to a Sunnies party before. It is important to keep in mind that we cannot be certain if multiple times means more than two times or more than a million times. However, we do know that there are people who choose not to go, and that for about 25% of the population going to parties in the Sunnies is not a regular behavior.

Given the rumors about drinking at the Sunnies, how much is drinking really related with going to these parties? The survey asked students, “How many days of the week, if any, do you consume at least one alcoholic beverage?” Figure 1 shows us the relationship between how many days a week a student drinks and how often they attend parties at the Sunnies. To no major surprise, students who drink more during the week tend to go to Sunnies parties more often (see Note 1). While this finding leads us to think that partying at the Sunnies and drinking go hand in hand, the amount of drinking a week only goes up by one day a week for those who have been to parties in the Sunnies more than just one time. 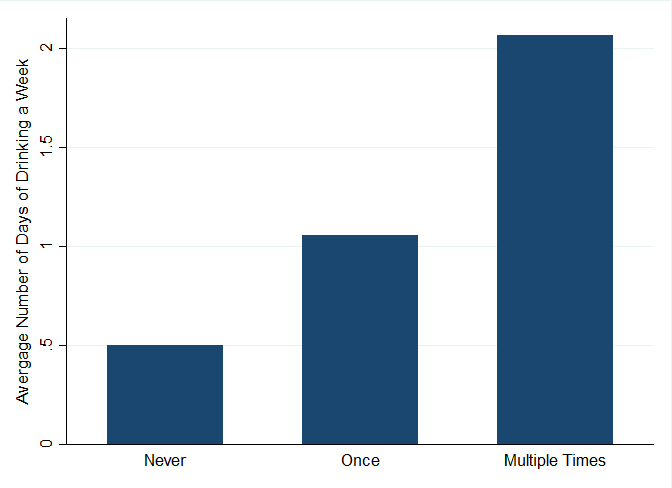 While the Sunnies appear to be central in Denison party culture, that does not mean students are comfortable with it (or equally comfortable with it). There have been a variety of instances like here, here, and here where students have shown their disdain for the party culture that is dictated by the Sunnies. To better understand who is comfortable in the Sunnies, I looked at how comfort with parties hosted in the Sunnies differs across gender, race, social support network size, and amount that they drink. The statement provided in the survey read, “I (would) feel comfortable at most parties hosted in the Sunnies;” responses ran from strongly disagree (1) to strongly agree (7). The campus average was 4.2 out of 7, and about 33% percent agree (or strongly agree) that they would be comfortable, neither statistic showing great love for the Sunnies.

Surprisingly, there was not much of a difference between the average level of comfort between men and women (see Figure 2), though gender hides a tremendous amount of diversity within each category (see Note 2). I found that students involved in Greek life had an average at 5.24, which is higher than the overall average for comfort. Another interesting finding was that seniors were not more comfortable at Sunnies parties than freshmen. While we often assume seniors would be much more comfortable, freshman had an average comfort level of 4.0 and seniors had an average of 4.3.

Figure 2 – Who is Comfortable at a Party in the Sunnies? 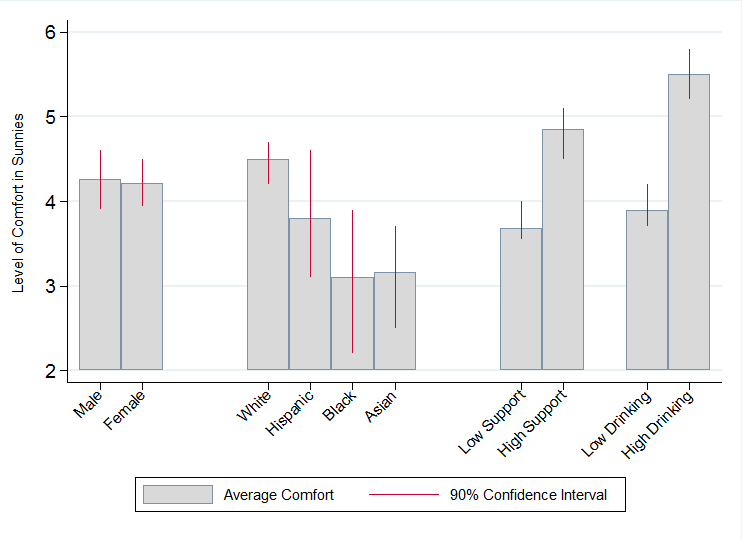 Party culture is a tricky institution to discuss since no one owns it – there is no central coordinating committee. Moreover, parties occur in private rooms opened at the discretion of the residents, following internal, surely unarticulated, and often cognitively impaired rules. Yet “party culture” is still a thing that Denison owns, in a way, a benefit of campus living that many expect. Perhaps it is too much to ask that private associations serve a public purpose. At the very least, as a community, we need to remind ourselves to be mindful of our actions and treat others with respect. Just because our campus is diverse does not necessarily mean that we are always embracing difference in the ways that we should.

Abby Zofchak is an a capella singer who decided to take a break from swaying on stage so she could use her political science skills to better understand the mysterious “Denison bubble.”

Notes:
1. To be sure of this relationship, I ran a regression model with how many days students drink a week and how many times they have been to the sunnies and found that the relationship was statistically significant (p<0.05).
2. The survey asked about genders other than male or female. While some chose another gender, there were not enough to permit statistical analysis.
3. Social support was measured using the number of friends the individual could depend on for: getting a ride to the grocery store, borrowing $20, talking about a breakup, and getting a set of notes from a missed class.