Alexandria Ocasio Cortez (oft referred to by her initials, AOC) is wildly popular among critics and supporters. The Democrat and representative for New York’s 14th district is the second-most mentioned Democratic politician on Fox News, according to a Washington Post analysis. Her record-breaking freshman speech from the House floor racked up more than one million views in 12 hours, per deadline.com.

In response to news that French police forces were threatening to join violent protests for better wages, economic reform, and resignation of French President Emmanuel Macron, the 29 year old Ocasio-Cortez tweeted, “people are starting to realize our issues aren’t left and right, but top and bottom.” Is AOC right? We put her claims to the test. 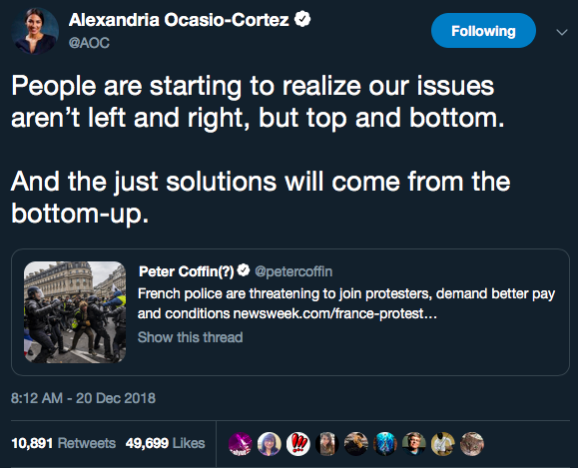 If she is, we should see divisions among class lines in preferences for hierarchy versus equality. To measure that, we use Social Dominance Orientation (SDO) scores, which are generated by how strongly respondents agree or disagree with statements like: “It is good that some groups are at the top and some are at the bottom.” A score of one means a complete commitment to equality, while a score of seven indicates devotion to hierarchy. As in earlier data, Denison students show a strong commitment to equality. On average, students hold an SDO score of 2.5 on the 1 to 7 scale – students on the whole are committed to equality. 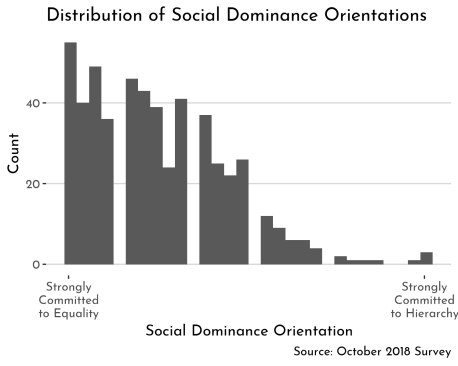 Next, the distribution of social class, as self-reported by Denison students, shows the expected skew. Most claim to be middle (30.2%) or upper-middle class (40%), and few identify as lower-class (6.6%) or upper-class (10.1%). With a lean toward equality and more upper than lower class students, is AOC wrong? How is class linked to social dominance?

It seems AOC’s statement only rings true among non-white students. In this case, wealthier students are much more in favor of hierarchy over equality than their lower-class peers. As for their white counterparts, social class has little influence over their commitment to hierarchy.

But, how do these class differences play out when SDO is taken into account? Predictably, we see that pro-capitalist views are linked to higher SDO scores. And this link is exaggerated by social class differences. In other words, among students strongly committed to hierarchy, upper-class students are even more in favor of capitalism than their middle- and lower-class peers. Conversely, among students with low SDO scores, less-affluent students are only slightly less warm toward capitalism than middle- and upper- class students.

AOCs tweet aside, what does this all mean? It seems that while almost all students are committed to equality, that does not translate cleanly to economic views. For organizers and activists like AOC, lower- and middle-class citizens may be more likely to rally around issues and policies as they relate to equality, rather than systems like socialism. This isn’t surprising – Americans are attached to the notion of rights, and therefore fail to organize around class interests sometimes especially under labels (“socialism”) that have been demonized.

French protesters were fighting for better wages and economic reform – not egalité. But, Americans are not French.

Taylor Shook is on a mission to eat as many Egg McMuffins as possible.