By The Darian of Harrington

One of the many new features that Denison has graced our campus with is the Party Tent. It makes sense to provide a safe and secure environment for the inevitable partying that happens on this campus. I have never personally visited the party tent, but I have heard mixed reviews from different students. I have heard favorable opinions that praise the safety, security, and controlled environment for partying as well as unfavorable opinions stating that Denison as an institution should not be infringing upon the private sphere that is partying. Using data from the October 2018 and March 2019 campus survey, this article will showcase the distribution of opinions when it comes to Denison’s Party Tent.

The overall distribution of feelings towards the Party Tent in March 2019, shown below, highlight three peaks of opinions on opposite sides of this spectrum. That is to say, the plurality of opinions were on the 0, 50, and 100 mark. However, the total average of warmth toward the Party Tent is just 35 (on a scale of 0-100). The campus does not have warm feelings towards the Party Tent and it represents a decline of 5 points from the Fall 2018 survey. Did everyone sour on the party tent principle? 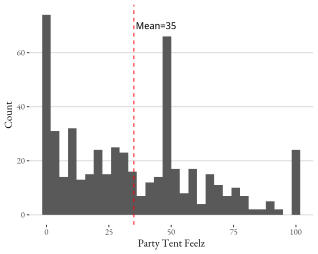 In the fall, Djupe found that Freshmen were quite negative about the tents, while everyone else was on the fence. The figure below shows how opinions on the Party Tent changed in the interim by class year. It’s pretty clear – all of the classes, save the first-years, soured on the Party Tent. The seniors have the largest growth in negative feelings from Fall 2018 to Spring 2019, dropping 15 points. The class of 2022 is the only one to warm to the Party Tent. Why?

In the fall, the speculation was that collective action ruled the roost and established groups simply took over. However, across the year, it is entirely possible that freshmen figured it out and started organizing, disturbing the social norms of party culture in their favor. Older students may feel that Denison is trying too hard to impose themselves on the norms of party culture that existed in the pre-tent era. In quite the reversal from the fall, now support varies systematically by class year with first years the most and seniors the least supportive. 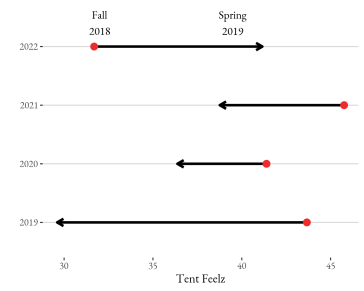 In the fall post there were also differences by gender identification and sexual orientation, so I’ll look at that again with the Spring data. We changed the questions and categories from the fall, so the results don’t quite match up,[1] but they’re close. The only statistically significant result in the gender identity graph is that students who identify as women feel warmer towards the Party Tent than those who identify as transgender – men are in the middle. This was the same pattern as in the fall, just dropped 5 points or so. There has been a bit of a shakeup in how different sexual orientation groups view the Party Tent – bisexual students have dropped in support (by about 10 points), and gay students have warmed toward it compared to the fall scores. There are very few people in most of these categories, so it’s difficult to tell them apart in a statistical sense, but the results are suggestive that there has been a bit of a sea change in views toward the Party Tent across this academic year. 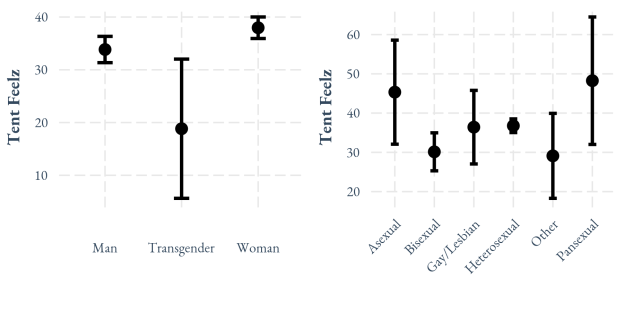 Out of all of the results from the analysis of opinions regarding the Party Tent, the result that I find the most interesting is that groups often thought to be on the outs in Denison’s party culture, such as first-years, have shown a positive trend in feelings towards the Party Tent in contrast to the rest of the class years. I would be interested in seeing if this trend sticks and will continue with incoming classes, or if feelings grow more negative as Denisonians grow older in their college careers and gain control of party culture. Only time will be able to give us a better overall trend of opinions regarding this new Denison feature. Will it truly democratize Denison’s party culture?

Darian Harrington is an amateur misanthrope who is simultaneously trying to save the world with his Political Science education. When he isn’t hermiting in his room, you can find him procrastinating in Knapp.

1. There is no right way to gather gender identity and sexual orientation data. However, in the Spring data, we used something closer to what we think are best practices. We asked about gender assignment at birth separately from current gender identity. Gender identity allowed for male, female, and transgender as co-equal identity categories. Sexual orientation was more inclusive than is typically seen, allowing for all categories seen in the last graph. Fully 17.6% of the sample identified as something other than heterosexual, with most (10.4%) identifying as bisexual.